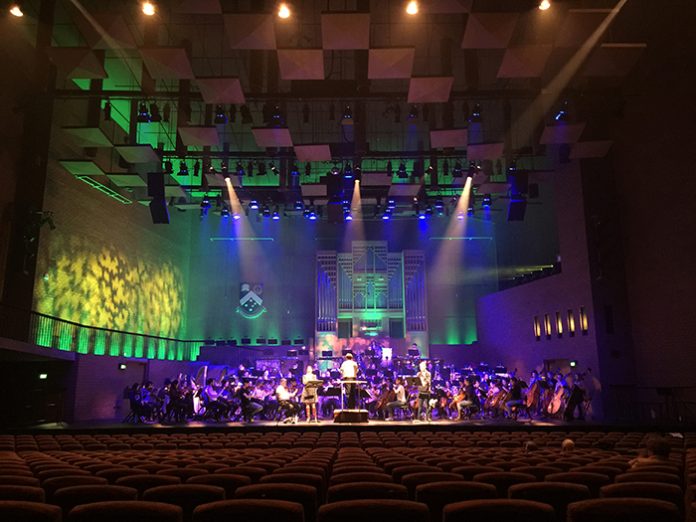 Who knew that hitting the right note for an orchestra could be as simple as changing the lights they were sitting under? It was the challenge, and the solution, for the man charged with the efficient running of Blackwood Hall, the performing arts centre at Melbourne’s Monash University.

Russell Proud is Manager, Technical Services, for the University’s Academy of Performing Arts and he knew there was a problem when he started in the job six years ago. He started an upgrade program immediately, culminating in a major overhaul early this year that replaced a lighting system last upgraded around 15 years ago. The results were instantly noticeable.

“Previously our air conditioning system used to struggle to keep the temperature constant once the lighting came on, which is really not great for orchestral instruments. They start to de-tune as the temperature changes,” Russell said.

“After the upgrade, in the middle of February when we did our first orchestra in here, we were asked to turn the air conditioning up because it was a bit cold! That was the first time I’ve been asked to do that!”

There was further confirmation the upgrade was a wise move when the Melbourne Symphony Orchestra moved in for several days before Easter, to do a recording. Russell said the process was far simpler than in the past.

“Over the whole period we didn’t make any changes to the air conditioning. Normally we would reduce the fan speed for the recording, then raise it for the breaks, but we were able to leave it at the lower speed and it held the temperature steady right through.”

Russell started the process by upgrading the infrastructure to cope with intelligent lighting, then considered the next step. It wasn’t just about good quality white light for musicians trying to read their music and keep their instruments in tune. The Hall also hosts theatrical performances, which meant he needed a modern-day solution for both – so he contacted Andrew Maher, a lighting and staging technician with Jands.

“I had some discussions with Andrew because he had helped us with our ETC Gio lighting console upgrades. Working together, we realised that the LED advances by ETC were finally at a stage where I could use LED in the space. Andrew gave us some ETC fixtures so we could get a real feel for what it would be like, and that was a huge help in making the decision.”

Andrew says lending the fixtures for the real world testing was the first step. Then Jands did some energy calculations to help Russell work out the cost saving he could make by changing to a mix of high efficiency tungsten and LED.

“The energy calculation side of things is important, but it’s also vital that venues don’t take a step back in quality of light simply for the sake of saving on power,” Andrew said.

In the end, Jands’s solution for Robert Blackwood Hall was a hybrid tungsten/LED system using a mix of ETC Desire D60 LED fixtures and conventional ETC Source Four tungsten luminaires. All the work was carried out by Jands’s major Melbourne-based supplier, ASL Systems.

The new rig the ASL team supplied allows the space to quickly change from a lecture presentation, to an orchestral performance, and all the way to an opera performance with very short turnaround times.

“We make a white light with the LED and we fill the holes in colour temperature with tungsten to give it a nice warm light, a really good quality white. The LED also means we can do all sorts of theatrical lighting for other musical and other performance events. The switch has managed to surpass what we had before and allowed us to do many different things.”

The big test of the new system was a recent performance by the Monash Academy Orchestra of the opera, Bluebeard’s Castle. The lighting team used sconce lights for the musicians, and the LED colour to give dramatic effect to the opera.

“We would not have been able to do the show with the old system,” Russell said.

“The amount of colour changing, the dramatic look of the stage. Everyone was so impressed because it is such a major improvement. We’ve come such a long way, and so many of our other regular clients who use the Hall have commented on the difference.

“All the issues we had previously, we’ve now overcome – and we had such good service from Jands too. We’re very happy.”