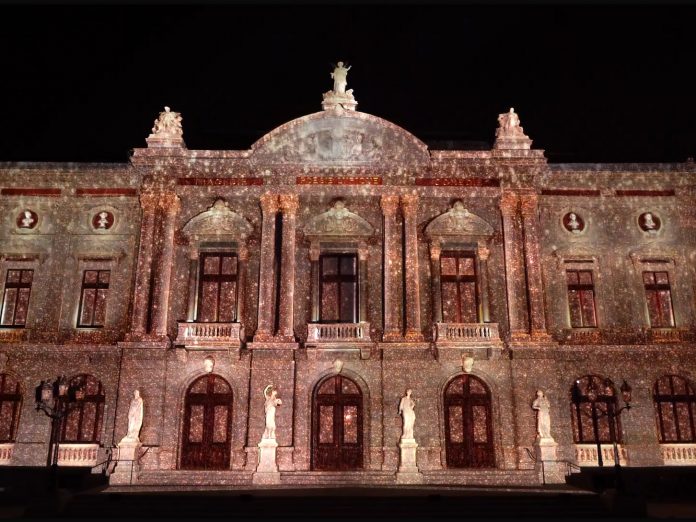 To celebrate the 140th anniversary of the Grand Théâtre de Genève and its reopening after a three-year renovation, Le Truc agency and Dorier Group produced an impressive video mapping projected over the entire building façade.

To achieve such a stunning projection mapping, teams of Dorier Group relied upon Modulo Player, the versatile media server solution by Modulo Pi. In late March 2019, le Grand Théâtre de Genève came back to life to celebrate its reopening and 140th anniversary. On this occasion, a show tracing the history of the opera house was specially created and projected on the old building façade.

At sundown, a 10-minutes show designed by Le Truc agency was projected 4 times in front of a large audience who came to enjoy the combination of music and video projection. Sophie Defonte, Production Manager at Le Truc, explained: “When it tells a story, embraces the façade architecture, comes with a good soundtrack, and succeeds to be informative and playful, then video mapping turns into a true show for the audience.”

During the show, the façade of the Grand Théâtre, its sculptures and moldings seemed to come to life over the transformations and warps used to tell the building’s story. To perform the video mapping projection over the entire façade, Le Truc agency appointed Dorier Group, an audiovisual event company with more than 40 years’ experience.

CUSTOMER STORY The AV service provider used 4 x Barco UDX-4K32 video-projectors, as well as 1 x Modulo Player media server by Modulo Pi for the show. Raphaël Glandut, Technical Designer at Dorier Group, stated: “For such a massive building, we needed a media server capable of playing 4 feeds so that we could do a soft edge blending projection.”

Raphaël Glandut mentioned other reasons for working with Modulo Player: “It is a very steady and reliable system that reads very large files. This allowed us to work in a pixel workspace very close to reality.”

To deliver a neat video mapping and make sure the show perfectly adopts the shapes of the façade, its sculptures and moldings, Raphaël Glandut and his team could rely on Modulo Player’s XMap function. The exclusive feature helped extract the projection areas to easily warp them independently in 2D. Following the success of the show for Le Grand Théâtre de Genève, Dorier Group plans to work with Modulo Player on other video mapping projects. “As Millennials are keen on immersive experiences, we observe a growing interest in video mapping technology” concluded Raphaël Glandut.