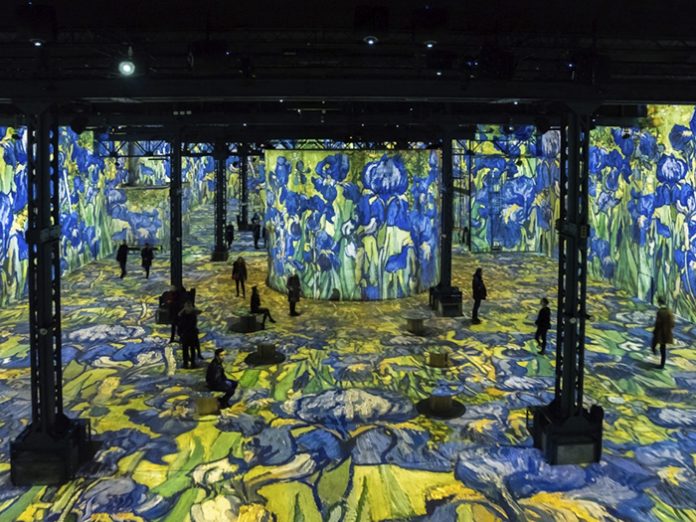 Nexo’s high-performance super-compact ID Series loudspeakers are playing a key role in a new digital exhibition in Paris, which offers a spectacular immersive AV experience with the paintings of Vincent Van Gogh.

One of the most innovative artistic experiences in the great city of Paris is currently hidden behind the unremarkable façade of a former ironworks foundry in the 11th arrondissement.  Inside this huge 19th century space, one of France’s leading cultural producers Culturespaces has been so successful with its digital experience of the art of painter Gustav Klimt, that it has opened a new exhibition dedicated to Vincent Van Gogh.

‘Van Gogh – the Starry Night’ is a visual and musical creation realised by Gianfranco Iannuzzi, Renato Gatto and Massimiliano Siccardi. In the same presentation is a short programme by Danny Rose dedicated to the imagery of Japan.  Both use the AMIEX technology (Art and Music Immersive Experience) developed by Culturespaces in 2012.  The AMIEX Concept is based on the virtualisation and high-resolution projection of works of art on immense surfaces, and delivers projection-mapping at its artistic best.

French AV specialist Cadmos was chosen as the integrator for the project, designing and installing high-performance AV technology to show the portraits and landscapes of Van Gogh on 35,000 sq ft of projection surface, over walls that can reach up to 12 metres high.   The Halle de l’Atelier is an already complex space of angles and divisions: the designers have expanded it to 360 degrees across all four walls, the floor, and extra surfaces like a floor-to-ceiling cylinder (the foundry’s former chimney) which houses a circular display area.

Nexo engineers worked with Cadmos to perfect the immersive audio design delivered by Nexo ID Series loudspeakers hidden in the metal truss work overhead.  These super-compact cabinets, just 300mm wide, offer 120° by 60° HF coverage, and are mounted both horizontally and vertically. 29 ID24s are used in the main room, supplemented by 11 ID S110 10” subwoofer units (another 4 ID24s and a S110 are used in a smaller salon, with a wrap-around screen.)  In total, 11 Nexo NXAMP4x1 amps are used to power the systems.

Speaker locations are evenly spaced throughout the warehouse venue in order to get homogenous and consistent SPL coverage, without having to play each cabinet loud.  Cabinets in the central row are delayed to those on the walls: stereo is crossed.

A recent visit by Michael Gochanour, a technical journalist, included these comments about the: “consistent, full high-fidelity, detailed and balanced sound.  One was unaware of the source of the music; it was just there.  Even when walking around the cavernous concrete warehouse, which would normally be a nightmare of booming reflections, bass pockets and standing waves, the sound was one tamed beast…One never got too close, far or off proximity; it was always even, clear and transparent.”