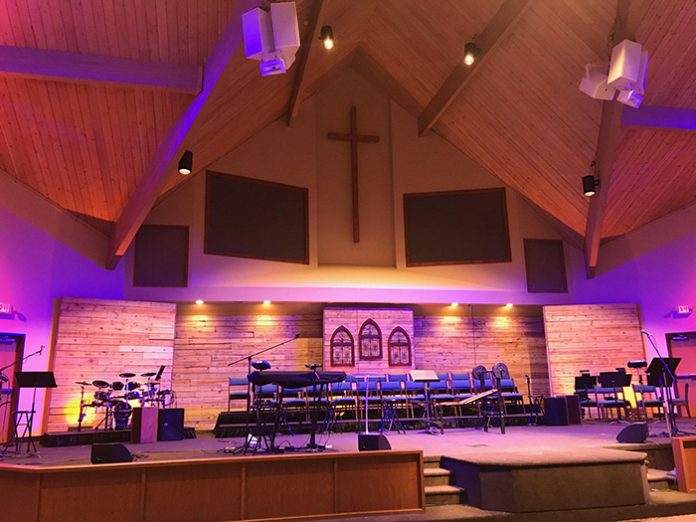 Located in Otisville, Michigan, Richfield Church of the Nazarene is dedicated to serving the community through an inspirational and heartfelt worship environment. Offering both contemporary and traditional services each week, the church recently underwent a lighting renovation to better create a positive and life-changing experience for all their members and guests. Needing an upgrade to the complete lighting system, they worked with the design professionals at Mercury Sound and Lighting who installed a new house design filled with Chalice LED downlights from Altman Lighting.

“This was actually our first time working with the church and they wanted us to take a look at their theatrical and house lighting equipment which was reaching the end of its life cycle,” began Japheth Boivin, A/V Solutions Facilitator, Mercury Sound and Lighting. “The existing house lights were custom fixtures made specifically for the space when it was initially constructed, and they were becoming costly and difficult to maintain. To alleviate these challenges, they wanted an LED retrofit of their house lighting design, so we installed a package of Chalice LED downlights.”

As the team at Mercury Sound and Lighting prepared to tackle the retrofit of the house design, they would face a bit of a challenge when it came to working space. In a sanctuary with both high ceilings and minimal room to manoeuvre overhead, the innovative dimming capabilities of the Chalice LED luminaires would prove to be a valuable asset to the design.

“With a ceiling height of about 45-feet at some points, and no crawl space in a sanctuary that was built from the top down, running new lines to new locations was not an option,” continued Japheth. “This was another one the reasons we opted to go with the Mains-Dimmable Chalice fixtures so that we could utilize the existing power lines and still have all of the benefits of an LED house lighting system.”

The Chalice LED Series is the most diverse range of downlights available with mounting options that include pendant, recessed, aircraft cable, wall and yoke mount; and dimming choices ranging from Mains Dimming to DMX. Also available with a wide variety of LED colour or white light options, plus numerous lens or reflector choices, the Chalice LED Series is the most versatile and easy to integrate downlight solution available today.

“I have been in the industry for a long time, and for house lighting fixtures in an LED retrofit, Altman Lighting is my first call,” added Japheth. “The install was a 1-to-1 replacement of the old system giving them a significant reduction in energy costs as one Chalice only pulls about 145 watts, compared to 1000-1500 watts each for the older fixtures.”

Ready to begin the installation of the new house design, the church was excited to achieve an expanded level of light coverage throughout the sanctuary. Replacing the outdated system that was unable to adapt to the dimensions of the space, Boivin was able to capitalize on the lensing system of the Chalice LED luminaires for a more complete design.

“The existing fixtures couldn’t really get light adequately into certain parts of the sanctuary, if at all, but now we are definitely able to do that,” explained Japheth. “Being familiar with the Chalice line and how easily the lensing can be changed, we were able to have our technicians quickly swap out the optics depending on where each fixture was located, and it has really transformed the space.”

With the new house design in place, the team at Mercury Sound and Lighting turned their attention to the control of the LED luminaires. After replacing the antiquated dimming system as well, they were able to implement an easy-to-operate and creative solution for an all-inclusive lighting environment.

“For the control, we created various lighting zones for the different architectural looks the church wanted to see which are easily controlled via a DMX wall plate,” explained Boivin. “From there, control is also run back to the new theatrical lighting console so that when the FOH technician is active, control is taken away from the wall plate. This way there is no tug-of-war between the two control points, and they can easily integrate the house lighting into their theatrical worship designs.”

While many worship communities around the world continue to invest in the updating of their worship technologies, the house lighting systems may often be overlooked. Whether previously viewed as too difficult or costly to replace, Boivin believes the breadth of the capabilities provided by the Chalice LED Series opens a broad range of design possibilities.

“For your dedicated LED house fixtures, the Chalice line is very adaptable to spaces which might not look accommodating to an LED retrofit at first glance,” concluded Japheth. “Depending on what you want to do with the space, this fixture has taken away a lot of the difficulty in LED house lighting retrofits, and it gives you many design and performance options that you simply can’t get with other solutions.”