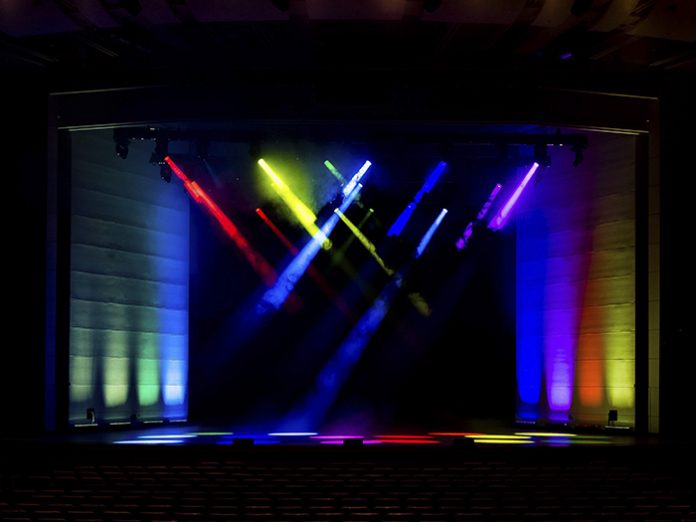 The Minneapolis Convention Centre has completed another phase in its continuing
technology upgrade adding Ayrton Bora-S wash luminaires to the main auditorium.

“We replaced our old wash units with a greater number of Bora-S and kicked up the rig a
couple of notches,” said the Centre’s Technology Coordinator, John Eberlein. “We’ve
gained greater capabilities with Bora, which can act as a spot, gobo and shutter unit.
This takes us to another level.”

Sleek and compact, the feature-packed Bora-S is particularly suitable for scenic
applications requiring a great deal of light output, such as concerts and other live
entertainment. It is equipped with a new LED module calibrated at 8000K delivering
powerful metallic white light with a record-breaking output of 42,000 lumens.

ACT Lighting, Inc., Ayrton’s exclusive distributor for North America, had demo’d an
assortment of fixtures for John and hinted that Ayrton had something new coming
soon. “We decided to wait and see Ayrton’s new light, and I’m glad we did,” he said.
“We fell in love with Bora’s light output, flat field, gobos and shutter cut capabilities,
which we didn’t have before. We also didn’t see the halations you find in some LEDs.”

John noted that the versatility of Bora-S gives him multiple options for the
Minneapolis Convention Centre’s wide range of clients.

“The Beach Boys entertained at a not-for-profit corporate event here, and their lighting
designer was very happy with the units,” John reported. “Our Boras were the most
moving lights they’ve had on their shows.”

The fixtures also lent themselves to the dynamic staging of a concert featuring Indian
singers Sonu Nigam and Neha Kakkar, he said.

The Minneapolis Convention Centre deployed Bora-S for the National Association of
Basketball Coaches’ awards ceremony held during the Final Four. “They illuminated a
set piece from Atomic and everyone was very pleased with Bora’s saturated blues that
matched the branding colours,” John pointed out.

Area high schools that used the Minneapolis Convention Centre as the venue for their
graduation ceremonies “were able to wash their choirs or orchestras then change over to
light the dignitaries on stage,” he added. “The Boras are mounted on three trusses flown
over the stage; we have no conventionals hung over the stage now – we don’t need
them. It’s great that we no longer have to have a ladder crew come out and physically
focus the conventional units when the area that needs to be lit changes.”

According to John: “Bora has quickly become our workhorse light. Bora’s speed,
effects, colour and light output are fantastic, and we can count on it to do a wide variety
of things. This is the light for us!”

The Bora-S fixtures were provided to the Minneapolis Convention Centre by Gopher
Stage Lighting of Minneapolis.