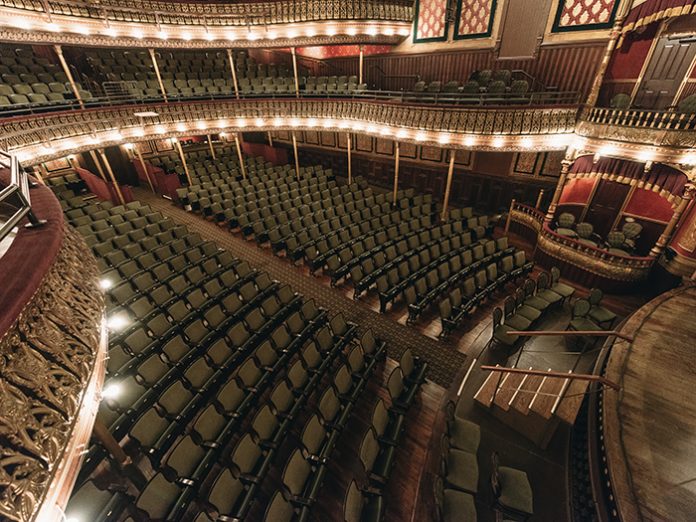 Originally built in 1889, the elegant theatre at the heart of Mississippi State University’s Riley Centre in Meridian was painstakingly renovated before reopening as a performing arts venue in 2006. In both its 19th and 21st century incarnations, the room was celebrated for its intimate feel, open sightlines and excellent natural acoustics. The point source sound system installed in 2006 was designed to preserve these attributes, but after more than a decade of use, it was showing its age and becoming increasingly less rider-friendly. Early in 2019, the 900-seat theatre blended the best of old and new by upgrading to a Meyer Sound system based on JM-1P arrayable loudspeakers as supplied by Nashville-based Mid-Coast Sound.

“We were tired of fighting with promoters over riders and the room is not suited to hanging temporary arrays,” said William Nix, hired as technical director at the Riley Center prior to the 2006 opening. “So we went back through several years of tech riders to see which loudspeaker brands were most requested, and it came down to Meyer Sound and two others. Then we started considering proposals. Of course, line arrays are all the rage, but we also asked for point source alternatives.”

Assisting in the evaluation was William Roland of acoustical consultants Roland, Woolworth & Associates, who had also contributed to the original system design.

“The room is an acoustic gem,” he said, “and when running at 85 to 95 dB you get a balanced blend of direct and room sound. I was never a fan for putting line arrays in that room. You don’t need extreme raw power or throw, and there’s no place to hang them without getting in the sightlines of the VIP boxes. But it seems most proposals were for line arrays and a ton of subs, at least until the Meyer proposal came through.”

That proposal was generated by Bruce Bossert, owner of Mid-Coast Sound, who had previously designed a similar system based on JM-1P loudspeakers for Hillvue Church in Bowling Green, Kentucky.

“It was a fortunate circumstance because as soon as they told me about the room and what they were doing in there, I realized that the JM-1P and distributed delays were what they needed, not a line array,” he said. “So I arranged to bring in a demo system.”

The system was flown for a Christmas show featuring the durable country-pop band Diamond Rio. “That night was nothing short of spectacular,” recalled Bruce. “It was a capacity crowd, all the important people were there, and everybody left smiling. There was no turning back at that point.”

The venue’s William Nix concurred:  “My boss [executive director Dennis Sankovich], my audio staff and others with seriously good ears had come for this and an earlier line array demo, and everybody agreed that the Meyer Sound JM-1P sounded far better in the room.”

Because no hang points are available in the historic auditorium, the demo systems had to be flown from the grid above the newly built stage house. For the permanent installation, Mid-Coast Sound project manager Duane Tabinski designed custom steel mounts welded to the new steelwork around the proscenium opening. The left and right clusters of three-each JM-1P loudspeakers are bolstered on the low end by three 1100-LFC low-frequency control elements placed under stage front. The main clusters cover all seating to the rear on the main floor, but delay rings are installed for the dress circle (four UP-4XP loudspeakers) and upper gallery (three UPJ-1XP loudspeakers). Downfills mounted under the JM-1P clusters are UPJ-1P loudspeakers, with two UPJunior-XP loudspeakers for box fill and five UP-4XP for front fill. System drive and optimization are provided by two Galileo® GALAXY™ processors, one 816 and one 408. Comprehensive remote monitoring is implemented via an RMServer.

“It turned out a far better option than the most recent line array proposal,” recalled William Nix. “With the line arrays we were getting null points over the floor, and the horseshoe balcony fronts were wreaking havoc with the straight back throw of the arrays. Meyer Sound’s trapezoidal point source was obviously the right solution, and it also came in as the lower cost quote.”

Consultant William Roland was pleased that his instincts were confirmed. “What they ended up with is ideal for that venue, and Meyer Sound was the only one to offer and demo a complete point-source solution. It gives you high SPL if you want it, but in a controlled way that works with the room instead of trying to overpower it. The soundstage is just amazing. It’s rider-friendly and it was very cost-effective, so everybody is happy.”

Artists that have played the Riley Center since the new system was installed include America, The Allman Betts Band, Lonestar, Jason Isbell and the 400 Unit, The Righteous Brothers and The Reduced Shakespeare Company.

The centrepiece of what is officially known as the Mississippi State University Riley Center for Education and Performing Arts, the theatre was originally known as the Grand Opera House of Mississippi. It was designed by noted New York theatre architects J.B. McElfatrick & Sons, and in its heyday, it hosted A-level touring performances passing through between Chicago and New Orleans. The theatre closed in 1927 and, as it remained locked up in legal disputes for decades, the basic architecture and décor were largely preserved intact until the $25 million restorations. The complete Riley Center complex, also encompassing an adjacent former department store, includes a 200-seat studio theatre, exhibit hall, meeting rooms and conference space with full teleconferencing capabilities.