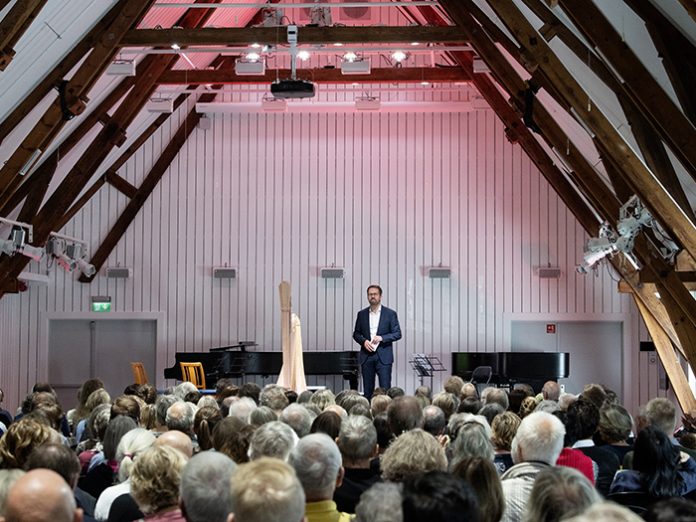 Pianist Leif Ove Andsnes and a group of acclaimed musicians will focus on the music of Dmitri Shostakovich for the fourth annual Rosendal Chamber Music Festival, presented August 8-11, 2019. Organised by the Barionet Rosendal, the festival takes place by Norway’s Hardanger Fjord, a magnificent location surrounded by mountains, glaciers and waterfalls. The primary concert venue is the Riddersalen, a one-time barn now transformed into an optimum environment for musical enjoyment thanks to acoustical enhancement from a Meyer Sound Constellation system.

This recent transformation of an old farm building — one never intended to serve as a concert hall — into an acoustical space ideal for hosting chamber music has earned universal acclaim. “Over the past three seasons musicians and audiences alike have responded very well,” said Leif. “For me, it’s total magic, and after a while I don’t think about the fact that there is a system. I just feel like I’m in a very good room for making music — spacious and reverberant. I trust that the people in the last row can hear as much detail in my performance as people in the front row.”

The main challenge with Riddersalen lies in the dimensions of the building, which is long enough but too narrow and lacking in sufficient volume to function acoustically for chamber music. By applying advanced acoustic engineering coupled with the latest in high-resolution digital signal processing, Constellation widens the perceived aural space and creates a rich, immersive acoustical ambience.

Constellation does not directly amplify the instruments. Instead, it captures the natural acoustical environment of the hall and subtly modifies the surrounding acoustical characteristics. The entire reverberation envelope can be precisely tailored to the acoustical requirements of the performance. For chamber music, Constellation is set for a mid-band reverberation time of about 1.5 seconds. However, longer reverberation times can be selected if desired for choral or orchestral music.

The Constellation system at Riddersalen has three basic components. 34 microphones are spaced around the hall to sense the natural ambient acoustics. The microphone signals are sent to a sophisticated, high-resolution digital signal processing system which applies patented computer algorithms to create enhanced acoustical characteristics. The output signals are sent to 145 small loudspeakers spaced around the room, which together emulate the effect of reflective surfaces placed at the ideal distance and angles from the musical performance.

The Constellation system was specified by the acoustical consulting firm of Brekke & Strand and installed by systems integrator Bright Norway. Design and calibration was led by John Pellowe of Meyer Sound’s own Constellation team in collaboration with Brekke and Strand.

“Experiencing Constellation for the first time opened my eyes and ears,” said Leif. “I really had to rethink a lot of my perceptions — when I heard how excellent it sounded and how the acoustic could be transformed, I said to myself…this is the future.” Elsewhere in the world, Constellation creates acoustical ambience for the Svetlanov Hall in Moscow, San Francisco Symphony’s SoundBox, and Jazz at Lincoln Center in New York, among others.

Meyer Sound systems can be found in concert halls, opera houses, and museums all over the world. Major cultural institutions using a variety of Meyer Sound systems for voice and incidental music reinforcement include the Musikverein in Vienna, the Concertgebouw in Amsterdam, and Konzerthaus Berlin.