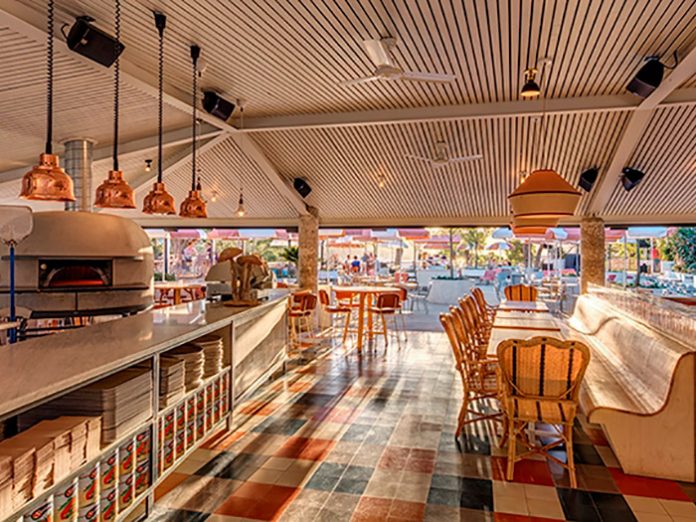 Merivale is a large, fast-growing Australian hospitality operator with a number of high profile pubs, bars and restaurants, mainly in the Sydney area.

The business is run by Justin Hemmes, who takes a very personal and hands-on interest in the audio; thus when The Newport was added to the portfolio this year, he and Merivale’s AV Manager, Glenn Rayner were only likely to specify the best — and this included Martin Audio’s new CDD (Coaxial Differential Dispersion) series and MLA (Multi-cellular Loudspeaker Array).

Formerly known as the Newport Arms, the venue is a large shore-line pub with an al fresco garden area that looks out over the water.

Setting out the sound design rationale, Glenn Rayner explained, “We looked at the existing audio at The Newport and quickly established that the only way we’d get the sort of clarity and coverage we required was to have lots of speakers.” And this mean negating any dead spots or alternatively ‘hot spots’.

In the final analysis they specified no fewer than 180 CDD loudspeakers. “It’s an enormous installation — the design process took months,” he admits. The Martin Audio CDD loudspeakers were given the vote following a shoot-out with a number of other premium brands.

Glenn Rayner was already aware that the Martin Audio CDD coaxial loudspeaker design would be well suited to hospitality installs such as this. “Because it’s coaxial you can install the speaker in a landscape or portrait orientation and you maintain the same highly coherent sound quality. What’s more, the dispersion pattern of the Martin Audio CDD design is intentionally non-symmetrical. It means there’s a wider dispersion pattern for those close to the speaker and narrower for those more distant. The advantage of such an approach is a more consistent delivery of HF, regardless of the listening distance.”

But he could equally see a role for MLA in the Newport garden, which features a fully-fledged performance stage. The audio comprises eight Martin Audio MLA Mini elements a side, each with a pair of MLA Mini subs. Every MLA enclosure is bi-amped and individually addressed (some 40 channels of amplification are devoted to the stage alone), and the array is beam steered down to constrain the throw to around 25m.

Explaining the rationale, Glenn Rayner said, “We wanted to do something that no only sounded good but looked the part. The Martin Audio array certainly looks like it’s meant to be there and looks a lot like a festival stage — which is what we were going for.”

Live music is a regular weekend fixture at The Newport and a rack has been prepared that’s easily wheeled to side of stage and with a single Cat5 connection plugged into the system. A ‘one-connection’ setup preconfigures the rest of the venue’s loudspeaker zones to accommodate the live performance. The remaining 180-odd loudspeakers throughout the rest of the venue are time-delayed, using the stage PA as ‘time zero’.

The system overall is driven by 38 four-channel amplifiers — giving a total of 144 channels (with no more than three speakers assigned to each channel — giving far superior zone control.

“Across every output and group of speakers we have EQ, compression, delay, HPF, LPF, DSP on every output; we’re not limited in any way,” he continues. “It means we can walk the venue with a Wi-Fi device and fine tune settings for every set of speakers. It took weeks to get right.”

Much of the success of this design and installation was due to the involvement of experienced audio consultant (and Technical Director of Technical Audio Group, the Martin Audio distributors), Anthony Russo. He played a pivotal role in the design, while the meticulous installation itself was undertaken by Corporate Technology Services.