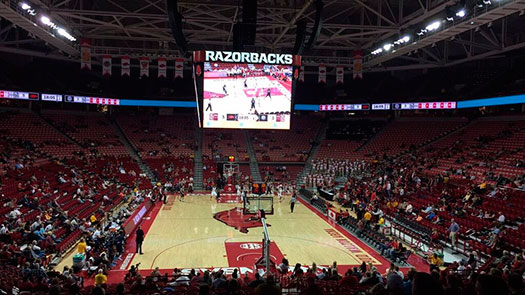 Known affectionately as the Bud and The Basketball Palace of Mid-America, University of Arkansas’ Bud Walton Arena has been the home of the UofA Razorbacks Basketball team since 1993. Over time, the 19,200-seat venue has undergone numerous upgrades. The most recent, includes a new scoreboard and an audio system driven entirely by Lab.gruppen D and C Series amplifiers – specified for their BSS integration and Lake Processing capabilities.

The project was decidedly entertainment driven, and designed to further enhance the game day experience, said UofA Associate Athletics Director, Justin Maland: “It’s not just about the game anymore, it’s about entertainment, video, promotions not just playing canned music between time outs. Also, the configuration of the way we place fans in the arena has changed; for example, we have courtside seats we didn’t have 20 years ago and, with the exception of the centre hang, the audio system hasn’t been replaced since we opened.” Beyond the age of the system, he adds, they required a system with greater flexibility, control and troubleshooting capabilities.

Designed by WJHW and installed by Clair Solutions in October 2015, the system was specified with fan experience top of mind. “The old system was no longer adequate in any way, and UofA wanted to step it up with a more musical system,” said Scott Bray, consultant at WJHW, who designed the system and has worked on other projects at the University.

The integration offered by Lab.gruppen’s D Series and C Series figured heavily into the choice of Lab.gruppen to drive the venues new EAW loudspeaker system. “It allowed us to cut back on DSP and Amp circuits, which saved us a lot in terms of electrical upgrades,” added Dustin Goen, System Designer at Clair Solutions.

In all, 52 D Series amps were deployed for the project, with a mix of all power options available. The main arrays are powered by 18 D:120L’s and 18 D:80L’s, and the subs by four D:200L’s. 12 D:80Ls were also used for scoreboard fills and delays. Additionally, 17 C 28:4s were installed to cover the event level, ceiling speakers, under balcony and concourse. In addition to Lab.gruppen amps, BSS DSP and EAW loudspeakers, the new system includes a Soundcraft Vi1 console and a Shure wireless package.

Lab.gruppen’s built in Lake Processing handles the grouping of speakers and arrays, and allows users to implement changes globally, per section, or per part of the array. “We wanted to use Lake Processing for the EAW crossovers and Lab.gruppen allowed us to do that without having as much investment in the BSS DSP front end,” Dustin said.

The ability to integrate the D Series’ Lake platform with BSS was a major consideration. “We were able to do a handshake between Lake to AMX to BSS so that there was a single unified control system with BSS Audio Architect,” Scott said. “Lake provides an open 3rd party protocol that send/receive data to AMX that is interpreted for the BSS GUI, so there’s a single user interface. They don’t have a full-time sound guy, so we needed to make it as easy as possible.”

Lab.gruppen’s compact footprint was another key factor, Scott said. “The standard rule now is four-channel amplifiers and this was a cost effective solution for power output and control. Using Lake, we were able to load all the settings for the EAW boxes easily, which took an incredible amount of work out of the equation.”

“From an operations standpoint our internal staff is excited about the opportunities we have,” Justin said. “We now have the troubleshooting abilities, the chance to do more creative things in various sections of the arena and the flexibility at our fingertips to make adjustments the correct way, rather than shutting amps down and killing areas of the arena. Now we can do it the way it should be done to deliver the best game day experience for Razorback fans.”

As examples, he cites commencement ceremonies and the annual Walmart Shareholder’s event, a major production that will benefit greatly from the improved sound, flexibility and control. “But another reason for this project was that we’re looking towards the future, and potentially hosting some other types of large scale events for students.”