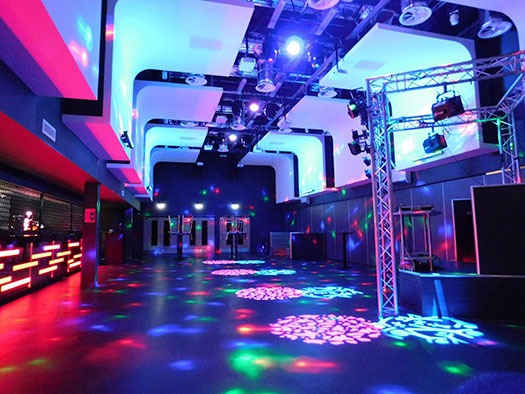 The University of St Andrews is one of the oldest and most prestigious institutions of higher learning in the world, with Nobel Laureates, ambassadors and Prince William counted among its alumni. Founded in 1885 to give support and provide representation to its students. Tasked with providing a modern lighting solution for the refurbishment of the Student Union theatre and club – two traditional hubs of student life – Audio Light Systems installed 12 Chauvet Professional Rogue R1 Spot fixtures to award the Students’ Union venues with an arsenal of modern lighting solutions.

The central wish of the Students’ Union was for both the theatre and club venues to be upgraded with high performing fixtures to give both venues unique looks – a task which initially looked impossible due to budgetary constraints. However, thanks to the lightweight and tour ready Rogue R1 Spot, Audio Light Systems had the perfect solution for both venues.

“As the bright beams of Rogue R1s are versatile enough for both theatrical productions and large club events, this effectively enabled us to kill two birds with one stone with regards to the dual installation,” said Trevor Cross, Director of Audio Light Systems. ”Owing to their lightweight and tour ready compact construction, the Rogues could be installed in the theatre and transferred to the nightclub as and when required.”

While installing two sets of separate lights for the theatre and club would have meant compromising on quality, thanks to the affordability of the Rogues, the installation cost remained within budget.

“A big factor in choosing the R1s was the fact that several theatres we worked with in the past spoke very highly about the performance and reliability of the fixtures. The powerful light output, gobos and strong colour effects make them ideal for the theatre environment. And when transferred into a smaller club setting, they’re able to give the space the characteristics of a much larger club.”

“We placed 16 SlimPARs around the DJ booth to wash the dancefloor with a bounty of colour. The SlimPARS work particularly well in conjunction with the Rogue R1 Spots, which hang when required from truss in the centre of the ceiling.”

The Xeno 2500 strobes and COLORband PiX fixtures – stationed behind the DJ booth and around the walls of the club, respectively – were placed strategically to enhance the club atmosphere. Trevor continued: “To create a feeling of being in a club, we had the pixel mappable COLORbands add depth to the room with their automatically programmable settings. The Xeno 2500 strobes round off the entire installation, giving energetic flashes of white light to stir up the atmosphere in the club when required.”

Thanks in large measure to its new lighting system, the historic Students’ Union now offers a vibrant look that appeals to contemporary tastes, ensuring that the building continues to excel at fulfilling its age-old mission of enhancing student life at one of the world’s great universities.