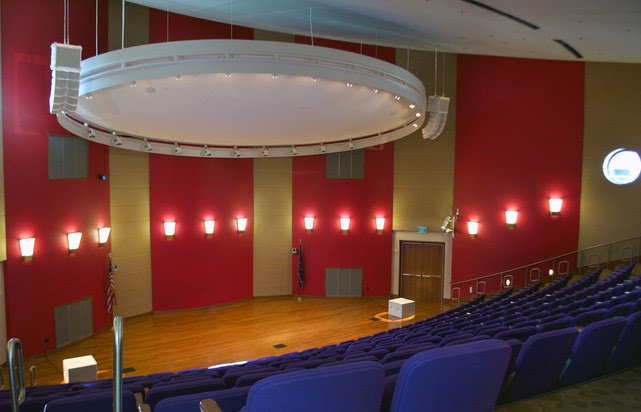 Originally completed in October of 1917 at a cost of more than half a million dollars, the impressive Greek Doric-style Central Branch of the Indianapolis Public Library, naturally clad in Indiana limestone, officially celebrates its 100th anniversary this year. A big part of the institution’s more recent history is Clowes Auditorium, an intimate 300-seat, 2,800 sq ft venue that was added during the Central Library’s extensive expansion in 2008. Hosting everything from classical chamber performances and Latin jazz bands to children’s theatre and corporate presentations, Clowes (pronounced “Clew-ess”) Auditorium is now truly ready for the future, thanks to a new L-Acoustics Kiva II sound system installed in May by integrator Mid-America Sound.

The auditorium, which had been using temporary ground-stacked PA components as needed, now has its first-ever flown system consisting of six Kiva II modules hung underneath one SB15m sub per side and complemented by a single SB18m sub positioned below on each side of the stage. A single LA12X amplified controller powers all of the Kiva II modules and flown subs while an LA4X drives the two ground subs and leaves two open channels available for a potential future expansion of fills.

However, one might not notice the new Kiva II system until it gets turned on. That’s because this is the first US installation of the new standard factory-painted white version, which, when installed alongside the large white acoustical reflector above the stage, renders the system nearly invisible. And thanks to the Kiva II’s weight-to-power ratio the lightweight 31-pound enclosure puts out a remarkable 137 dB with no additional rigging infrastructure needed.

“This is such a great performance space,” says Clowes Auditorium Technician Jim Meyers. “It was designed to be an acoustically correct concert hall and it’s been that plus so much more. The seating is very steeply raked and that means there isn’t a bad seat in the house. What we needed was a sound system that could put the sound exactly where we wanted it and keep it away from where we didn’t want it.”

“After extensively modeling this room in Soundvision with a variety of different systems, I found that Kiva II gave us the optimal results, it achieved the most even coverage given the limitations we faced in the placement of the cabinets within the physical space,” says Mid-America Sound Senior Audio Engineer and Audio Operations Manager Kyle Spurling. “We would not have been able to accomplish this had it not been for the ability to splay as much as 15° between the enclosures. The added bonus of having 100° of direct horizontal coverage made it possible to implement this system as wide as we were forced to but still achieve a smooth response to every seat in the house. This was a very challenging yet rewarding install and we are extremely proud and happy with the results all the way around.”

Jim notes that the decision for Kiva II was clear, a lightweight, smaller, high-power enclosure that was almost transparent visually with L-Acoustics’ precision pattern coverage and great sound. Furthermore, it was a budget-friendly package that in this configuration also provides plenty of low-end responsiveness from the flown subs during corporate and other spoken-word events, enabling the venue to remove the SB18s from stage for a cleaner look, if desired.

“And this system was able to be flown without any additional rigging,” says Jim. “It would have been hard to ask for anything more. It’s the most transparent, articulate and seamless sound system I have ever heard.”