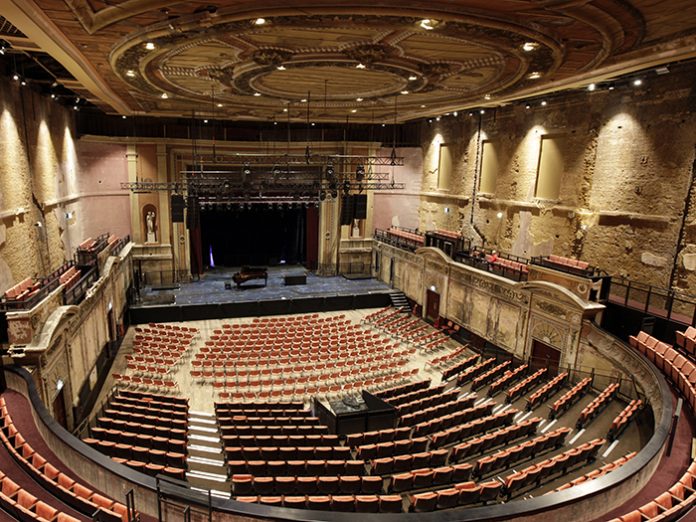 Alexandra Palace is an iconic building with a history absolutely linked to the narrative of London and Londoners. It was opened in 1873 as a grand Victorian public gesture – ‘the people’s Palace’. Since then, the complex story of the building, affectionately known as ‘Ally Pally’, has been marked by fires, restoration, substantial war-time damage, charitable rescue, and many political sagas. In December, after 80 years of slumber and two years of careful restoration, Alexandra Palace Theatre has opened again following several years of careful restoration. As part of the process, a complete technical infrastructure had to be installed, including a substantial L-Acoustics Kara PA system that brings a fitting quality of sound to the beautifully restored space.

The Alexandra Palace Theatre itself is part of the building’s East Wing. It had an original capacity of 3,000 and the stage was a marvel of Victorian engineering, incorporating a variety of innovative stage machinery. The BBC leased the Palace in 1935 and the theatre went unused until performances started again in 2004, in a limited way, though it wasn’t until 2012 that the Alexandra Palace and Park Trust contemplated a thorough restoration of the building, starting with the East Wing and the theatre. Work began in 2016 and the new Alexandra Palace Theatre opened its doors in December 2018.

One of the people brought in to help the project through reconstruction and on to a healthy, 900-capacity commercial theatre was Steve Brookes, now Head of Production and Technical at the venue. His aim was to bring a full, modern production infrastructure to the space so that no company or touring production would hesitate to perform at the Palace, but at the same time to honour the heritage of the building. “There were restrictions,” he said. “Whilst the theatre itself is Grade II listed, the stage is Grade I listed, meaning it cannot be demolished, extended, or altered without special permission. However, it had to be strengthened and is now supported with a sympathetic scaffold structure. Then it was a case of bringing in all the systems that we needed; PA, lighting and trussing.”

The audio system was supplied and installed by HD Pro Audio under the direction of the company’s Andy Huffer. “Andy and the team at HD have been a huge help,” noted Steve. “Although audio isn’t my main area of expertise I have always had a preference for L-Acoustics. Andy’s input has been invaluable, and I was pleased that we have been able to install an amazing system that works so well in this room.”

The PA system was designed in conjunction with L-Acoustics, settling on an optimum combination that worked both in terms of budget and coverage of the auditorium. The system comprises two hangs of nine Kara flanked by three SB18 subs, with two X15 HiQ as out fill. The system is powered by four LA4X and three LA12X amplified controllers, which are housed backstage in custom-built racks.

A P1 AVB processor – an EQ station, delay and dynamics processor – takes the FOH console inputs and links to the amplifiers with AVB. Seven X12 provide stage monitoring with an SB18 as drum fill, all run from two LA4X in a custom mobile rack.

“L-Acoustics did the final tuning of the system, which is perfectly balanced for the room,” Steve continued. “There isn’t the need for much EQ as we have the right placement and the right type of boxes. We have achieved complete coverage, with the main arrays pretty much doing the entire room, with six 5XT for lower SPL shows, or six X8 for louder shows, providing fill for the front few rows. This means there’s no need for additional, confusing sources.”

“It sounds beautiful in here,” added Andy, who also notes the advantages of the L-Acoustics brand to a theatre when it comes to bookings, “Any rider you get coming through, they are first or second on everything, which means no one will say they don’t want to use it.”

“It is having such flexibility that makes this a space people will want to hire that’s the key thing for any incoming production wanting to come into these venues,” Steve concluded. “If it’s nice and simple and you’ve got a box-ticking PA, it just makes the whole thing a lot easier.”