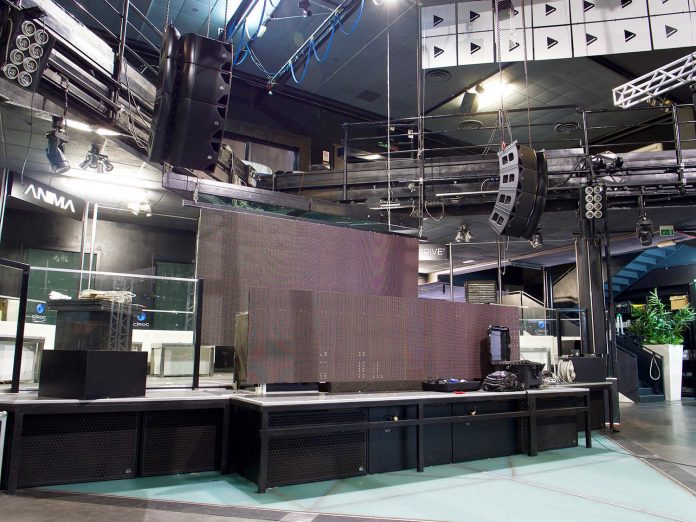 When the lights went down, and the fog machines began pumping out their mystery-inducing plumes and the DJ’s pulsating sounds filled the room, attendees threw aside their inhibitions and danced the night away at Odissea Fun City Dance Club, one of Italy’s largest at 7,000 square metres and home to seven different musical environments. And on this night’s celebration of the club’s 25th anniversary, everyone in attendance, from staff and management to performers and patrons alike, was treated to a sound experience never heard before at this club – a loudspeaker sound system designed by industry innovators Clair Brothers.

Owners of the club decided their previous system had served its purpose well but that the time had come to upgrade to something special. Prase Media Technologies, Clair Brothers Italian distributor, was asked to suggest an upgrade. Emanuele “Lele” Luongo, Product Manager at Prase, along with his expert cohorts, Ivan Omiciuolo and Matteo Barbaro, who supported the project in all its phases, recommended the new Clair Brothers PA. “The main challenge in this room,” explained Emanuele, “was to achieve homogeneity in the distribution of low frequencies while also minimising the reflections, within the entire audio range, caused by metal sets and mirrors on the side walls of the dance floor. We also worked to curb the incidence of medium-high range in the bar areas.” To overcome these acoustical issues, the PA system that was installed consists of two Clair Brothers kiTCurve12 clusters (four cabinets each) and eight CS218 subwoofers. Described Emanuele, “The subwoofers follow the perimeter of the stage, with two subs located in the centre, positioned as an inverted stack to help reduce the impact of low frequencies in the console area.” In addition to utilising the kiTCurve12 as the main system, there is also a pair of the exact same kiTCurve12’s being used as DJ monitors to allow the DJ to hear the exact timbre that the audience hears. The stunning result is an LR system with controlled dispersion teamed with a horizontal subwoofer array which allows for a higher SPL than the club’s previous system was able to deliver.

“The excellent combination of the compact dimensions of the cabinets with the high performance of Lake processing on all the PLM and amplification channels,” concluded Emanuele, “made it easy for us to meet all the requirements of this historic 25th anniversary installation. Once again, Clair Brothers speakers come through with flying colours. Odissea Fun City Dance Club is set up for great sound for a long time to come. There’s no doubt in my mind that everyone who listens will notice a huge improvement. It may even make them dance!”