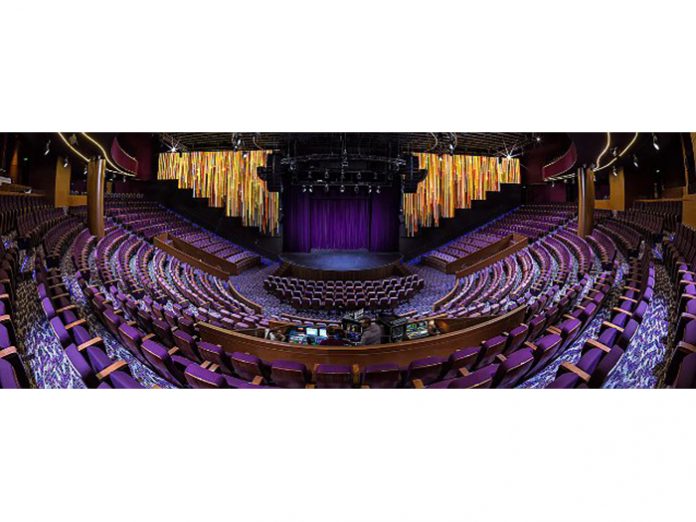 Opened in September 2016, Vegas City Hall is a multi-level, multi-function concert hall in the North West of the Russian capital of Moscow. Owned by the Crocus Group, the venue has been designed to be highly flexible, with different configurations accommodating a variety of events including world-famous circus acts and spectacular children’s shows, chamber recitals and acoustic concerts by Russian and international artists, as well as conferences, presentations and workshops. This flexibility needed to be reflected in the design of the audio system, with L-Acoustics loudspeakers providing a solution that delivers high quality sound system that can be reconfigured in under a half hour.

The audio system was designed and installed by Theatre Techniques and Technologies (TTT Group, Moscow), together with Sonoruss, certified provider of L-Acoustics products in Russia.

Vegas City Hall’s auditorium spans three levels in the form of an amphitheatre. In its standard configuration, used mainly for rock, pop and jazz concerts and children’s events, the hall can seat 1,472. For circus events, the seating immediately in front of the stage is removed to provide a bigger performance area, reducing the seating capacity to 1,354. Large screens delivering 4K content akin to the quality of image one normally finds in a movie theatre are sited around the hall. These are designed to create the effect of augmented reality, fully immersing the audience in the atmosphere of what is happening on stage. The Crocus Group wanted an audio system of a quality to compliment this.

“We received the architectural plan and requirements for the sound system, such as sound pressure levels, coverage and frequency response,” said Ruslan Piletski, Chief Engineer for the Vegas City Hall project. “Particular attention was paid to the system’s intelligibility and the architectural restrictions of the project, so that we could provide excellent results. After analysing the results produced by L-Acoustics’ Soundvision programme, the customer decided to go with our suggestion of an L-Acoustics K2 system, as it was the most suitable solution for solving the technical issues.”

The audio design for the Vegas City Hall was created by Alexander Ananiev, Acoustic Engineer for Sonoruss, and comprises 20 K2 – 10 per side hung either side of the stage – eight SB28 subwoofers, eight ARCS II for out fill and eight 8XTi for front fill, with a further 10 8XTi for under balcony fills and 12 8XTi for the balcony itself, plus eight ARCS Wide – four for the side scene area and four for the side forestage – with six 115XT HiQ for stage monitoring. Amplification is via L-Acoustics LA8 and LA4X.

“The most difficult part of the project was having two configurations for the same place; the concert hall and the circus arena,” said Alexander. “One universal solution wouldn’t be ideal, so we decided to use a reconfigurable design that could be changed easily and quickly, depending on what the hall is being used for at the time.”

For the first configuration, concert events, the SB28 are placed centrally between the left and right K2 hangs to provide maximum low-frequency and, therefore, quality coverage for all the seats.

In the second configuration, for circus performances, the SB28’s are sited behind the K2 clusters, to meet the audio requirements and free up space in the arena for the trapeze artists.

“Thanks to the simple installation and the preset configurations it is possible for two people to move the eight SB28s quickly and easily,” said Igor Novikov, Technical Director for the installation at Sonoruss. “This means that reconfiguration only takes around 20-30 minutes.”

“After the installation of the equipment, the system was set up and calibrated by an L-Acoustics sound engineer,” added Alexander. “We did all the necessary measurements and the analysis confirmed the accuracy of the system as predicted in Soundvision. The results more than satisfied all concerned.”

Vegas City Hall has been in high demand since it opened, with more than 60 concerts, circus shows and business conferences hosted there by the end of the year.

“Our technical support has had great feedback after every event,” said Ruslan. “The hall is really impressing everyone with its level of comfort and its sound quality. The audiences love it.”