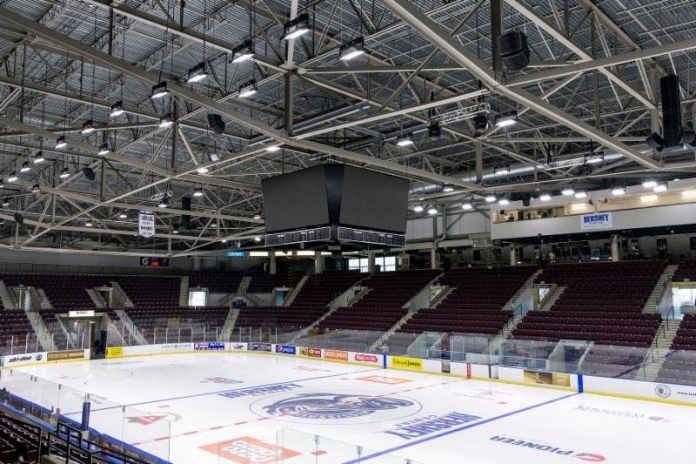 The Hershey Centre is a multi-purpose sports and entertainment complex located in Mississauga, Ontario, Canada. Home to the Ontario Hockey League’s Mississauga Steelheads and the NBA Development League’s Raptors 905, the facility also hosts a wide variety of events, ranging from live music and internationally-televised figure skating championships to boxing and indoor rodeos. In response to guest feedback on its nearly two decade old distributed sound system and concerns that it might fail during an event, an extensive upgrade brought major-league sound to the Hershey Centre.

The arena required an updated sound system with the enhanced output, intelligibility, fidelity and low frequency response professional sports fans have come to expect, along with the ability to customize coverage for a diverse array of events.

Design Specialist Dave Clark crafted a sound system based on Fulcrum Acoustic CX1265 12 inch coaxial speaker clusters. A total of 16 double CX1265 clusters hang above the playing surface perimeter to cover the arena’s upper and lower bowl, with additional clusters deployed into each of the low-roofed end zones to avoid obstructing scoreboard sightlines.

“Our sound reinforcement needs have evolved over time,” explained Hershey Centre
Manager, Greg Socha. “Acquiring the Raptors 905 as our new basketball tenant in 2015 upped the stakes as, unlike hockey games with music only during stoppages in play, professional basketball emphasises spectator in-game experience with non-stop sound, lighting and video. The new system has exceeded management and guest expectations by providing greater output and clarity, consistent coverage with seamless zone transitions, and the flexibility to tailor and optimise sound for all our events.”