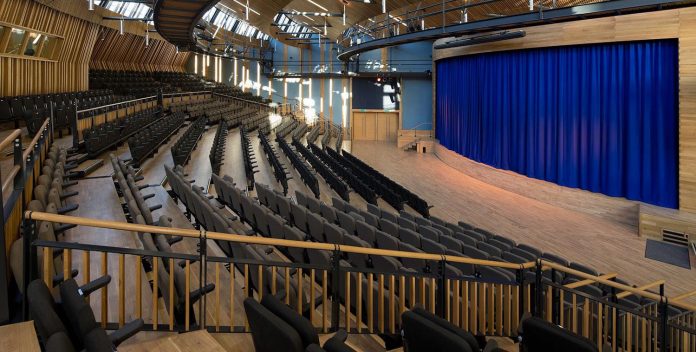 The Princess Alexandra Auditorium is a stunning 750-seat performance venue based on the banks of the River Tees at Yarm School.

The final piece of the jigsaw was to upgrade the sound system to one that matches the quality of the Civic Trust Award and RIBA Award winning auditorium. The space is fully flexible with tiered retractable seating and hosts an incredibly varied and versatile program of material – from school productions and lectures to touring bands and some of countries best known comedians.

The existing system was struggling to put across the clarity and detail needed for such work and the decision to audition a variety of loudspeaker brands was taken.

The unique space – described by the press as “…Sydney Opera House, Gateshead’s Sage and a bit Starship Enterprise…” – is a very wide auditorium that can be configured in many ways and the new system needed to offer full coverage, high SPL and clarity throughout whilst also being sensitive to sightlines.

Steering away from the existing distributed speaker concept KV2 were brought in by Richmond based audio suppliers Sound Hire to show what could be achieved by a more simplified Left Right Point Source approach.

Whilst other systems would struggle to tackle such a space with just a single mid/hi and sub per side KV2’s now legendary ES System did just that.

Dan Brookes, Princess Alexandra Theatre Auditorium Manager picks up the story: “We looked at a number of different systems for the auditorium and KV2 were head and shoulders above the rest in terms of clarity and overall sound. The system really allows the nuances of the music and vocal work we do at the school to stand out and take centre stage.”

Speaking of the decision to bring in KV2, Sound Hire’s Joe Mitchell comments: “I was approached by Dan to give my thoughts on a new system for Yarm School’s Princess Alexandra Auditorium. Having already achieved amazing results with KV2 in both fixed install projects and events courtesy of my own hire stock of KV2 products I had no hesitation in recommending KV2. KV2 brought in a single ES System with just ES 1.0 and ES 2.5 per side with their bespoke EPAK 2500 amplifiers and all agreed that this was the ultimate choice for this venue.”

To say the system has impressed since its install is an understatement with Dan, Joe and School Headmaster David Dunn effusive in their praise.

“We have had some wonderful feedback on the system from both parents and visiting artists alike. We now have a system that matches the quality of our venue,” said Dan.

Headmaster David Dunn commented: “We are delighted that we invested in the KV2 system. Since the system has been installed we have held a wide range of events, from School concerts to high-profile comedians and the sound quality is excellent.”

Joe even goes as far as stating: “Now it’s been installed I have to say that without exception it’s the finest sounding loudspeaker system I’ve heard in my 25 years in the business.”