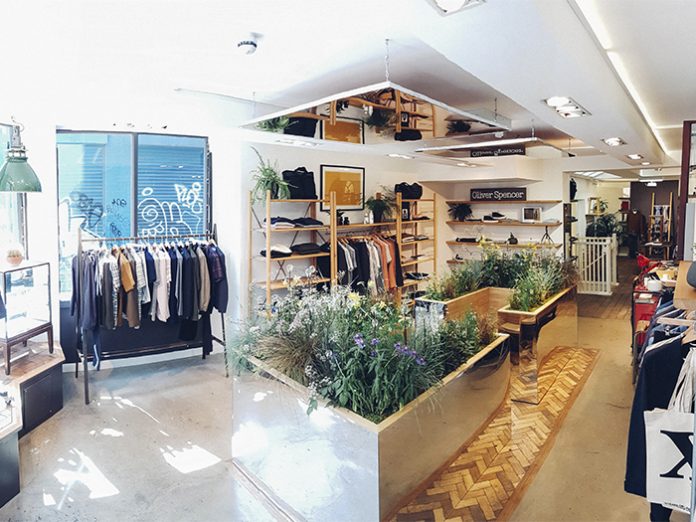 With a focus as much on sustainability as high-end fashion, Oliver Spencer is one of the UK’s most distinctive men’s clothing brands – a fact illustrated by the recent installation of a nature-themed immersive art exhibit within the chain’s flagship Soho London store. Named Reverie, the exhibit is the work of renowned artist Wolfgang Buttress, whose design incorporates wildflowers, and an intricate soundscape of countryside sounds delivered by an almost invisible K-array audio solution.

Founded in 2002, the Oliver Spencer brand already boasts a large online presence plus four stores in London with another in Toronto. The brand’s commitment to sustainability runs deep, leading to the connection with Wolfgang Buttress, an artist whose own connection to nature has become internationally celebrated.

The result is Reverie – a multi-sensory, immersive experience designed to highlight the importance of pollinators, lasting within the store for just one month. The installation comprises two facing wooden seats, which are surrounded by living, bee friendly wildflowers. Mirrors adorn the ceiling, while a Haeckels-curated scent suggests flora and beeswax. The accompanying audio seems to emanate from the flowers themselves.

“We needed loudspeakers that we could place as discreetly as possible, but which would still deliver a very professional performance,” explained Paulie Roche, Senior Audiovisual Engineer for Hoare Lea, the leading UK-based consultancy who designed and installed Reverie’s audio solution. “The visual aspect is so important in Reverie, we needed something with an extremely small physical form.”

Having used K-array in the past, Paulie visited the Italian brand’s exclusive UK distributor, 2B Heard, and soon found the answer he was looking for. “Dave and Sam from 2B Heard were really helpful. They even let us set up a test system in our office so we could experiment. We probably listened to the whole range of K-array speakers, as it’s impossible to copy and paste a design like this – we needed something unique, something extremely discreet,” he explained. “That’s the main reason that we decided to use the K-array Lyzard.”

The completed solution now comprises 12 hard-to-find Lyzard-KZ12 ultra-miniature line array elements nestling amongst the fauna. Two Rumble KU44 subwoofers are installed under the seats for low-end augmentation. “There is a hum and rumble of bees in the low end, and then you have birds tweeting and crickets whizzing around your head at the high-end,” enthused Pauli. “The Lyzard-KZ12s deal well with the high frequencies while the KU44s bring the low end from under the seats.”

He continued: “If you sat down in one of those seats and saw a speaker you’d pinpoint where the sound was coming from, but a lot of people sit down and they can’t do that because the speakers are invisible to them, so they start asking where the sound is coming from.”

With Reverie now having opened, visitors to the Oliver Spencer store are experiencing it daily. “We are very proud of the install,” Paulie said. “Customers sit down and close their eyes – at the launch it was like musical chairs because everyone wanted to have a go.”