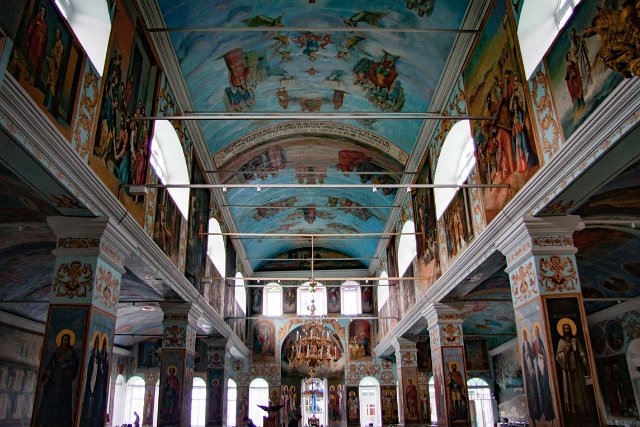 Saint Panteleimon Monastery is a Russian Orthodox monastery built on the southwest side of the peninsula of Mount Athos in Macedonia, Northern Greece. Currently home to around 70 resident monks and many pilgrims every year, a Yamaha audio system has recently been installed to help scripture reading be clearly heard.

The monastery was originally founded in the 11th Century, with much of the present complex built on a nearby site, closer to the sea, between 1812 and 1821. Today it is the largest monastery on the Mount Athos peninsula, its multi-storied buildings and tall cupolas giving the impression of a city in miniature. Its Cenobitic tradition follows the monastic practice of regulated community life. A key part of this is mealtimes where, after prayers in church, monks and pilgrims gather in the refectory to eat, while being read scripture from the Bible.

Ensuring that everybody hears the readings can be a challenge, partly because the refectory is large, with high arched ceilings, square columns and many other hard flat surfaces, but also because of the mealtime noise levels, which can reach 70dB. To help with this, the monastery had previously installed a consumer-type audio system, comprising three sound bars and four budget hi-fi loudspeakers. Unsurprisingly it did not prove effective, so systems integrator CMYK Service was recently approached to specify and install a professional solution.

Roman Belyaev, CEO of CMYK SERVICE is a dedicated Yamaha user. “Yamaha specialises in high-tech, innovative technologies that allow us to implement unique solutions for spaces with difficult acoustics,” he says.

“It was a challenging space to deliver seamless, high-quality sound, but we also had ensured that the scripture reader’s voice sounded natural. The monks also wanted the sound reinforcement to be as unobtrusive as possible, both acoustically and visually.”

Yamaha’s discreet VXS series loudspeakers provided the answer to both the aesthetic and acoustic challenges. A matrix of 32 white VXS1MLs was arrayed throughout the space on existing horizontal bars beneath the ceiling, with eight white VXS3S also installed for a subtle boost to the lower frequencies. The system is powered by an XMV8140 power amplifier and managed by an MTX3 matrix processor. A Shure microphone, phantom powered from the MTX3, is hidden in the lectern, with system control by a DCP4V4S surface mount unit and Yamaha’s Wireless DCP app.

The key to the system’s programming was subtlety, ensuring that the sound of the scripture readings is completely natural, the speakers nearer the lectern delivering less volume than those further away. The MTX3’s processing ensures there is no microphone feedback, while extra input sources can be used for background music and other applications if required.

Roman and CMYK SERVICE Head of Installation Igor Guschin worked with Dmitry Levkovsky of Yamaha Russia to specify and install the system, which provided additional challenges.

“The refectory remained in use during the installation, meaning it had to take place during the break between the morning and evening meal. The benches are very heavy, each needing eight people to move, so there was a lot of hard work involved!” smiles Dmitry. “But the customer is very happy with the system and the readings are clearly audible throughout the refectory.”

“The installation is unique because it is such a holy place,” added Roman. “The VXS1ML has become an ornament, or pearl necklace, located under the arches of the refectory, filling it with benevolent sound for many years. The brothers of the monastery and visiting pilgrims have thanked us for delivering the high-quality sound they have waited for many years.”

Another advantage of the Yamaha solution is that the system can be easily expanded in future. It has already proved such a success that a possible further expansion, to relay the sound from the church into the refectory, has been suggested.