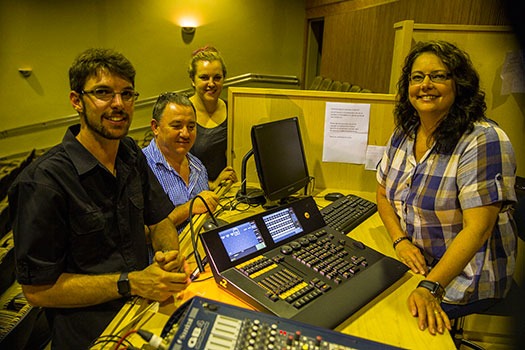 Hilton College, nestling in the KwaZulu Natal Midlands hills, north of Durban, is certainly an incredible setting for one of South Africa’s most exclusive boys’ boarding schools set in a large estate with its own wildlife reserve. Hilton College has its own theatre on campus – which is the proud owner of a new dot2 core console from MA Lighting.

The 471 seat venue modelled on the famous Elizabeth Sneddon theatre in Durban hosts around four or five major productions throughout the year and is utilised by the Drama, Music and Art departments over the academic year. It is also a receiving house for outside shows including the yearly Think Theatre Shakespearian production on the KZN national curriculum, which this year is Othello. The space is additionally used for school presentations, events and assemblies, and it’s the main venue for the highly acclaimed annual Hilton Arts Festival. Staged in and around the extensive grounds over three days in September, this showcases 60–70 new and innovative mixed media works encompassing drama, dance, comedy, musicals and physical theatre, creating a vibrant atmosphere attracting around 11,000 theatre loving visitors.

The dot2 was supplied by MA’s South African distributor DWR Distribution CC, and was ordered by Theatre Manager, Sheryl Hodkin, who looks after the technical elements with her team, which includes Gary Holder, the College’s IT support specialist. Sheryl first saw the dot2 in action during the 2015 Hilton Arts Festival, where DWR supplied a number of dot2 across the site – its power and small size being ideal for this type and size of application.

“I saw first-hand just how user friendly it was with the various different techs using it during the Festival”, commented Sheryl, “Just plug in and go, and it worked” She also spoke extensively to leading SA theatre lighting designer Michael Broderick, who was producing his “One Man One Light” show at the festival and thoroughly recommended it. Nick Barnes of DWR’s Durban office also thought it was a perfect fit for the college.

Regular freelance Lighting Technician, Chantal Ferreira, thought it was an excellent idea. She’s used an MA platform before, but not the dot2. However with the previous experience, she immediately felt comfortable using it. “MA is a leading brand”, stated Chantal, “and it’s great to have the dot2 here. You can configure it exactly to suit your own operating style, a great advantage for a theatre like this which is a multi-user environment”.

This all impressed Sheryl and her colleagues enough to go ahead and place the order. With the new console now in place, it will be in use daily, controlling up to 72 channels of dimming, including some static LED fixtures.

Sheryl further observes that as a busy performing house at a top school and with the rising prominence of the Arts festival, now they can offer a premium brand control option that meets or surpasses the requirements of incoming theatre companies. “With MA in the house, everyone knows you are serious about your work” she concluded.