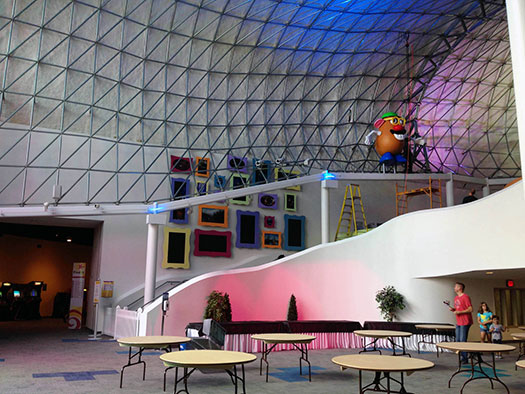 If it isn’t already, The Strong National Museum of Play in Rochester, New York should be on the bucket list of everyone who is a child at heart. The Strong houses the world’s largest and most complete collection of toys, both contemporary and historical, and is home to the Center for the History of Electronic Games, the World Video Game Hall of Fame, the Brian Sutton-Smith Library & Archives of Play, the American Journal of Play, and, as of this year, the National Toy Hall of Fame. With the addition of the National Toy Hall of Fame, The Strong undertook a major renovation of its sound reinforcement and lighting systems. Where it was previously piecemeal, The Strong’s sound system is now united and uses Ashly Audio processing, amplification, and user control, including a hardwired fader bank and a wireless Ashly Remote iPad app.

“Previously, The Strong used local sound generated by individual kiosks, and it had no specific lighting for any of the live performance spaces,” explained Jeff Stid, the Service & Installations Manager at Applied Audio & Theatre Supply. Applied Audio, which is also in Rochester, designed and installed The Strong’s new audio and lighting systems. “To keep things sounding calm and contained, we used a distributed audio approach to provide sound across the second floor area – which is now the National Toy Hall of Fame – and on the first floor area near the base of the stairs that lead to the Hall of Fame. The area has two stages in close proximity that are used for different purposes. The Strong’s layout is open, so there are no walls to help contain sound.”

By using Ashly Audio’s flexible signal processing software and customisable preset recalls, Jeff and his team turned one of the project’s biggest challenges into one of its greatest assets. Because the two stages are so close to each other and because the main purpose of using a distributed system is to keep overall SPLs as low as possible, multiple loudspeakers would have to serve multiple functions. For example, one bank of loudspeakers serves as the delay for the bigger stage while also being the stage-right mains for the smaller scoop stage.

“An Ashly ne24.24M network matrix processor provides all of the routing, signal processing, and preset configuration for the system,” said Jeff. “We were careful about how we set things up so that, for example, one set of speakers would have appropriate volumes and delays to work for the back of the room when they’re using the main stage, but with different volumes and delays to work as the front of the other stage. That’s the case throughout the museum; a given loudspeaker serves multiple functions depending on the preset. Ashly made it straightforward to optimize the processing for each separate use.”

In addition to the Ashly ne24.24M, the system uses one Ashly KLR-3200 two-channel 800W 70V amp, one Ashly SRA-2150 two-channel 150W amp, and one TRA-4150 four-channel 150W selectable output amp, for a total of eight amplifier channels. A Denon multimedia playback device pairs with four Shure wireless microphone systems and a collection of hardwired jacks as inputs to the system, and a Denon recorder joins the amps on the output side. The whole head end resides in a rack built by The Strong’s in-house carpentry team. QSC Acoustic Design Series ceiling- and wall-mount loudspeakers finish the sound reinforcement system and are joined by new ETC Source Four LED lights, custom finished to white to match the venue.

The Strong already had a Nicolaudie STICK lighting control to use with the new lighting system, but Applied Audio selected and customised the audio interfaces. An Ashly FR-16 sixteen-channel network remote fader bank, located at the rack, provides intuitive control over input and zone volumes and mutes. In addition, Applied Audio customised the Ashly Remote iPad App so that staff can walk the venue and make preset, volume, and source changes. “Ashly’s unique and comprehensive user control options are a huge benefit to us,” said Jeff. “With Ashly, we’re able to give our customers functionality that would otherwise require expensive products from controller-specific companies. Moreover, Ashly ensures that all of their controllers play nicely with all of their processors, which really simplifies installations.”

“Ashly’s fantastic product support is huge for us. Although Ashly’s reputation for building reliable equipment is well-deserved in our experience, it’s good to know that they have us covered in those rare events when something isn’t right.” he continued.

In the short time they’ve had the new sound system, the staff at The Strong have really worked every aspect of it, so much so that they have requested changes to perfectly match the way they’re actually using it. Applied Audio has been able to easily accommodate those changes by making changes to the Ashly ne24.24M processor. “It’s great,” said Jeff. “They wanted the ability to run ambient background sound for diffuse gatherings, and we were able to give it to them without a hiccup. Although it’s complex under the hood, Ashly’s customisable interfaces make it easy for people without a lot of technical training to properly run The Strong’s new system.”