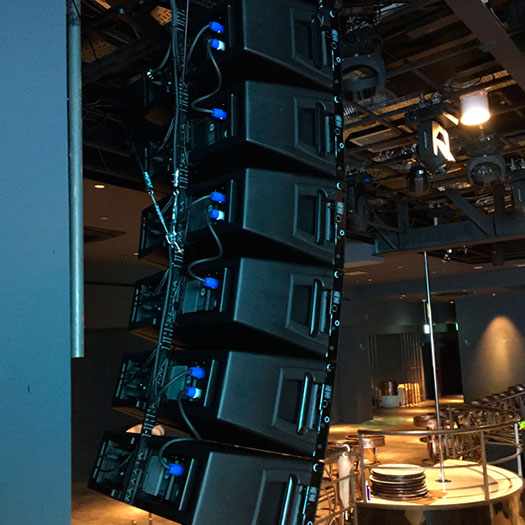 RCF D Line speakers have been installed in the recently opened Epica nightclub in Okinawa, Japan. It is one of the largest nightclubs in the area, with a dance floor more than 1000 sq meters large, and strategically located only a few steps away from the famous sightseeing spot of International Street.

The nightclub usually hosts about 1000 visitors per night during the weekend. Customers enjoy a cutting-edge interpretation of the latest trends in video and lighting, a large-sized LED screen and exclusive VIP rooms.

Several famous DJs, artists and entertainers were invited to the opening event starting from 18 July and lasting for 10 days. More than 2200 people attended the opening night on the first day.

The newly installed audio system includes six units (per side) of RCF HDL 20-A active line array in flying configuration on stage, and fro stacked HDL 18-AS subwoofers per side. For an enhanced reproduction of low frequencies two additional HDL 18-AS subwoofers were installed under the bar counter right in front of the stage, on the other side of the dance floor. Finally, the DJ booth is equipped with an RCF NX 12-SMA stage monitor and a NX S21-A active high-power subwoofer.

Despite its compact appearance, the HDL 18-AS is an extremely powerful subwoofer and left the artists very satisfied after the opening of Epica. The NX-12 SMA stage monitor and NXS 21-A subwoofer were praised by local DJs for their acoustic pressure and easiness of monitoring.