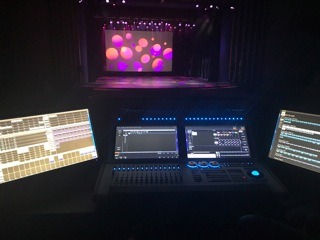 For 75 years, theatre students at Bakersfield High School have learned technical skills to prepare them for a life in the entertainment world. This year, Kern High School District invested heavily in its students’ professional education by upgrading Harvey Auditorium’s conventional lighting fixtures to LED and the lighting control to an Avolites Sapphire Touch running Titan v10.1 software.

Bakersfield High School is home to three different theatrical venues managed by Supervisor and Technical Director Dale Olvera, consisting of: a 1,646-seat Harvey Auditorium, 210-seat Little Harvey Auditorium, and smaller AV Theater seating 209. He also oversees the students who occupy those venues during the school year and the local arts community that uses the campus during the summer months.

“We used to be all conventional fixture-wise, but we currently have 140 moving heads and have on order another 80 moving heads, plus some other LED fixtures,” says Dale. Citing the progression of Harvey Auditorium’s consoles, he continues, “We started with the Avolites Pearl 2004, then went to a Diamond 4, then Diamond 4 Elite, and now we’ve been enjoying the Avolites Sapphire Touch with an Avolites Quartz on-hand as a backup. We like the uniformity of Avolites’ consoles. Even though they have changed over the years, the core format and the way they operate hasn’t changed much, it’s still very similar and familiar, which means that we don’t have to relearn everything.”

He also points out that the Sapphire Touch, paired with Titan v10.1 nicely suits their needs, especially with the console’s power to handle larger shows, plus the visualizer and pixel mapping capabilities that offer students more opportunities. “We were looking at pixel mapping software and virtual stage, so we are trying to get workstations together to educate students so that they can see what they can design on the real stage. Some students are learning to program and design their own shows and that’s another reason why we got it. Indeed, many of our shows are student-run.”

Dale appreciates the touch screen simplicity of the Sapphire Touch and has added two 21-inch touch screens to expand it more. “I like a big workspace,” he shares. “In my right hand I have the whole rig, every fixture, so I just pick what I want and fire it off.” The TD works with up to ten students each semester. “For some, it’s just an elective to get to graduation, while others want to pursue the theatre field beyond high school.”

Harvey Auditorium is a busy facility. There are at least two full main stage productions each year including this past season’s Antigone and Anything Goes, the choir director’s Pops Concert (Welcome to the Jungle) and the band director’s show (Prism). Adding to this, up to a dozen smaller student/ASB productions, 15-20 community related events and productions, and then they close out the school year with eight graduation ceremonies. Then summer begins and a new community event season swings into action.