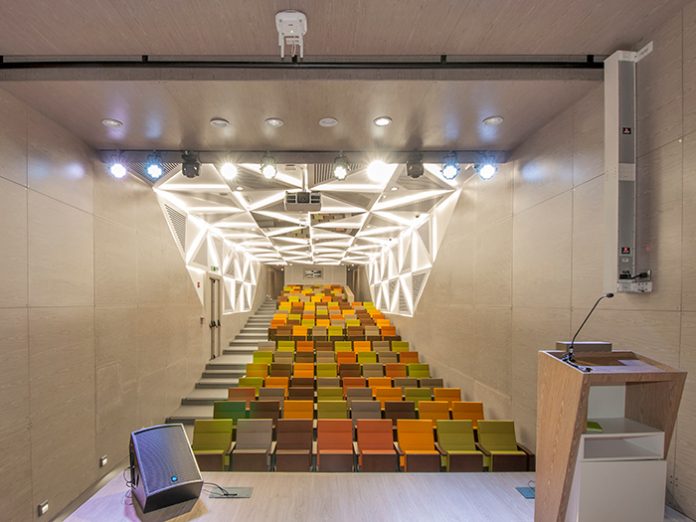 Since its founding in December 1653, the Universidad del Rosario has never interrupted instruction except for a brief period in 1819 when Spain attempted to reconquer Colombia. So important is the university’s role in the nation’s history that it is known as “the Cradle of the Republic.” At least 28 Presidents of Colombia matriculated there. Originally a Catholic institution, the university is a secular school today. Its main campus, known as the Cloister (Claustro), includes the Auditorio Mutis, an auditorium that features a new sound system based on Renkus-Heinz ICONYX Gen5 loudspeakers.

“The Auditorio Mutis houses videoconferences, musical performances, lectures, and more,” offers John Romero of Bogotá A/V firm Schallertech, which designed and built the new sound system. “It was very important that speech be intelligible from the first seat to the last, and the system also had to be able to reproduce the best sound quality for music.”

The previous sound system used eight small speakers to cover the entire area. “It was impossible to understand speech and to have a correct stereo image for musical presentations,” recalls Romero. “We worked with Morphosis, the architecture firm, for a couple of months to ensure the correct acoustical design. We designed the automation, wireless system, video system, lighting, and of course the audio system.”

The auditorium is long and narrow, and keeping sound focused on the audience and off the walls, ceiling, and floor was a major challenge. To accomplish it, the Schallertech team chose a pair of Renkus-Heinz ICONYX IC16-RN digitally steerable line arrays. Part of Renkus-Heinz’ ICONYX Gen5 series, the IC16-RN features 16 4-inch coaxial transducers, each with three high-frequency tweeters. Beam control is effective down to 400 Hz, and one IC16-RN can deliver multiple beams and multiple acoustic beam centres, which was key to keeping the sound tightly focused on the audience in the Auditorio Mutis.

The new system is managed over a Dante network. Calibration proved to be very straightforward. “The simplicity of Renkus-Heinz’ RHAON II System Designer software helped us with the calibration,” confirms Romero. “The BeamWare III steering calculation and simulation program made it much easier to figure out the beam design and acoustic centers we needed.”

The IC-16-RN’s slim, low-profile design enabled the main arrays to visually blend in with the walls. “The aesthetics and design of the ICONYX loudspeakers made this auditorium incredible,” Romero exclaims.

Completing the Auditorio Mutis system are a pair of powered Renkus-Heinz CF121M two-way Complex Conic loudspeaker systems, which serve as stage wedges. The CF121M offers a 12-inch heavy-duty woofer that can easily handle 500W of program power, along with a smooth, low-distortion 2-inch titanium high-frequency driver. It provides a 90° by 60° dispersion pattern with constant beam width and directivity, without the problems of conventional rectangular horns. The speakers are driven by a Renkus-Heinz PF1-200-series Class D intelligent amplifier.

“The sound the Renkus-Heinz loudspeakers provide is amazing,” attests Universidad del Rosario engineer Jorge Bravo. “We expected a high-quality system but the staging, the clear sound, and the aesthetics were even better than we expected. This is the sound system we’ve always wanted.”