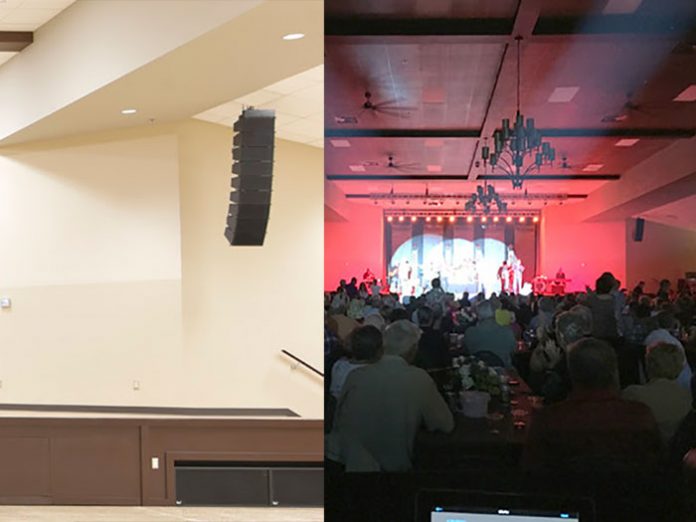 Completed in January 2016, the Hynes Center is a 15,000 square foot multi-purpose venue located in the Llano Grande Lake Park Resort. Although many touring artists carry a full sound system, the Hynes Center chose to install its own, permanent system, based on Alcons line arrays, insuring consistently high-quality audio for its concerts and other events. The system saw its first use for an Oak Ridge Boys three-night concert series in January.

Greg Carttar, Third Street R&D’s owner, used nine Alcons LR7/90 Micro Line-Array modules per side supplemented by four BF302 mkll double 15” subwoofers under the stage. The line arrays are mirror-imaged with the ribbons on the outside for beneficial sidewall reflections and the arrays are aimed downwards slightly to minimise rear-wall echoes. Two Alcons Sentinel 10 Amplified Loudspeaker Controllers provide a total of twenty kilowatts of power along with DSP pre-sets for the loudspeakers.

Third Street R&D completed the installation on time and Greg noted that commissioning went well: “In my experience, you don’t need to mess with an Alcons system.”

After the concert, FOH Engineer Marko stated this about the Alcons system: “Before the show, I walked the room and immediately noticed a lack of phase shift in the high end or any hump in the mid-range. The soundstage was very wide and the frequency response maintained well at the horizontal extremes. Highs and mids were smooth and excellent to the back of the room. This blew away even my previous experience with ribbon drivers.”

Marko continued and commented that the real test of the system came at show time: The Oak Ridge Boys have a six-piece band with a slamming drummer, solid bass player, lead and steel guitars and an acoustic player and keyboardist. In front is the legendary Oak Ridge Boys quartet doing featuring the extraordinary bass voice of Richard Sterban. Marko explained how he has mixed these guys on the largest rig and the worst junk, but that night – it was good from the go. With very minute EQ changes Marko had a solid drum and bass foundation, body in the voices and great definition on all the players. And when the bass singer hit his first solo note the crowd came unglued yet he sat clearly in the mix with the other guys, another test of a good system.

Marko concluded about the Alcon system with the following: “It’s a big room and the speakers look small from the rear of the house. However, there’s an astounding amount of sound from the Alcons arrays and these shows were fun to do!”