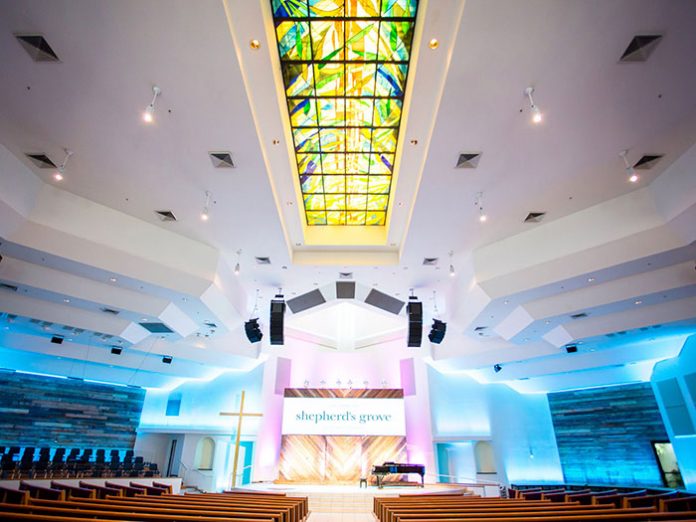 The Hour of Power broadcast from Shepherd’s Grove church has touched countless lives through its uplifting and inspiring messages. Recently, the church decided to enhance the quality of its world-famous broadcast services even further by switching to an all-LED lighting system. A key part of this lighting upgrade is a beautiful and engaging colourwash on the wall behind the altar, provided by a collection of 41 Colorist 12Qa linear RGBA fixtures from the ILUMINARC division of CHAUVET Professional.

Project Manager at Pacific Coast Entertainment, who installed the new lighting system, Kent Flemming commented the following: “Chad Blake, the Executive Pastor of Shepherd’s Grove, and his team gave us a clear directive to add a new all-LED lighting system that would lend a fresh look to their worldwide broadcast services. Since moving out of the Crystal Cathedral, the Hour of Power hasn’t had the ideal lighting system for its broadcasts. Pastor Blake and his team wanted LED fixtures for the rich colours and quality of the light they deliver, as well as the added energy efficiency they bring.”

The Colorist 12Qa fixtures play a key role in the new broadcast friendly lighting system at Shepherd’s Grove, according to Kent: “We mounted the Colorist fixtures on the floor and above the doorways to wash the wall behind the altar. This allowed the church to add colour to the Hour of Power video set, which creates a better visual presentation and pulls people on stage out of the background.”

Kent notes that there were a number of reasons why the ILUMINARC fixtures were specified for this project. He stated how the Colorist 12Qa was a good choice because it has low power consumption and lower heat generation, because it’s an LED, which saves energy and makes the people on stage more comfortable. Kent and his team also really liked the range of colour and punch that these fixtures have on camera. Then there’s the reliability of the ILUMINARC products – that was a major selling point according to Kent. Plus the Colorist 12Qa is very broadcast friendly.

Kent told how the church has been given a very engaging new look with its new lighting system. The Colorist fixtures were a success as they provided a great impact on the look of the broadcast services. Working with the other fixtures within the system, the ILUMINARCs have also created a warm and inviting atmosphere for people at live services too.

Although the new lighting system looks impressive to worshippers at the church, as well as those watching on television, installing the new rig was not without its challenges, according to Flemming: “The entire lighting rig in this project was new to the space so we had to add all of the infrastructure to make the lighting possible, from creation of the mounting positions to the addition of power and control everywhere that fixtures were added. Chad Blake was wonderful to work with as we addressed these issues. He was the internal driving force to make this happen, a pleasure to work with and very excited to see each day’s activities. In the end we created something we could all love.” So too can millions of television viewers.