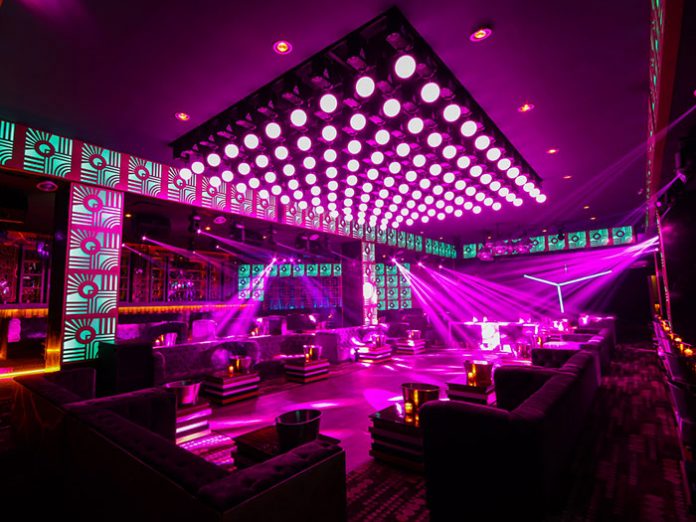 Bisoü is an upscale club in Monterrey, Mexico, that operates not only as the cosmopolitan city’s newest nighttime destination but also as a showcase of modern club lighting technology. Opened in spring 2016, Bisoü boasts a stylish design accentuated by a state-of-the-art lighting package of Elation Professional luminaires supplied and installed by Elation’s Mexican partner, Adimsa.

Adimsa owner Edson Rivera was involved in the installation from the beginning, a project that he describes as the interpretation of architect Filipao Nunez and the fulfillment of a longtime dream of club owners and brothers Victor and Emilio Califa. Edson stated how the club wanted to create an elegant venue with a modern, technological atmosphere.

Club manager Alejandro Galvez was also key in the project stated the reason for choosing the Elation fixtures for the dance floor light show and Elation ADJ fixtures was to fulfil the more decorative architectural aspects of the lighting design.

The contemporary, high-tech brief and avant-garde look called for a large cutting-edge lighting package which Adimsa delivered with a fully-immersive design that covers the entire club. As an example of the distinctive look, occupying a wall at one end of the club, in the stage / dance floor area, is an 8 x 4 matrix made up of Elation ACL 360i beam effects. Each compact single-beam light houses a single 60W RGBW LED and projects a narrow 4° beam out into the space. With the ability to rotate continuously 360-degrees, the matrix of 32 beam fixtures makes for a wonderfully creative and eye-catching show of ever-changing rays of light.

Mounted in each corner of the club in groups of three and splaying scanner and laser-like effects mid-air across the space are Elation’s ultra-fast Sniper 2R multi-effect lights, each with an ultra-narrow 3° beam and barrage of color and gobo possibilities. Working from the dance floor’s perimeter are Rayzor Beam 2Rs, small and fast colour-gobo-changing moving heads with more than enough power to cut through the other lighting. Also working from the perimeter and flooding the space in shadow-free colored light are Cuepix Battens, 1.1 meter-long pixel-controllable LED strip lights with RGB COB LEDs.

Installed throughout the club for decorative effect is Flex Pixel WP tape, thin and flexible pixel tape with RGB LEDs at 40mm centres. The Flex Pixel WP tape works together with the other lighting in the room in a coordinated dance of dynamic colour, pattern and chase effects. Easy to incorporate into any décor and customisable to any length, the pixel tape is a cost-effective solution for simple colour washing and effects, and is easily pixelmapped for complete design integration. A Madrix LED lighting controller handles control of the 1,200 feet of LED tape.

Whether dressing up the club for a high-energy night of EDM or a more laid back evening, the dynamic Elation lighting system means that Bisoü owners Victor and Emilio Califa not only have state-of-the-art lighting to complement the club’s modern design and help draw in crowds, they also have an energy-efficient system that will save on power bills and maintenance costs.