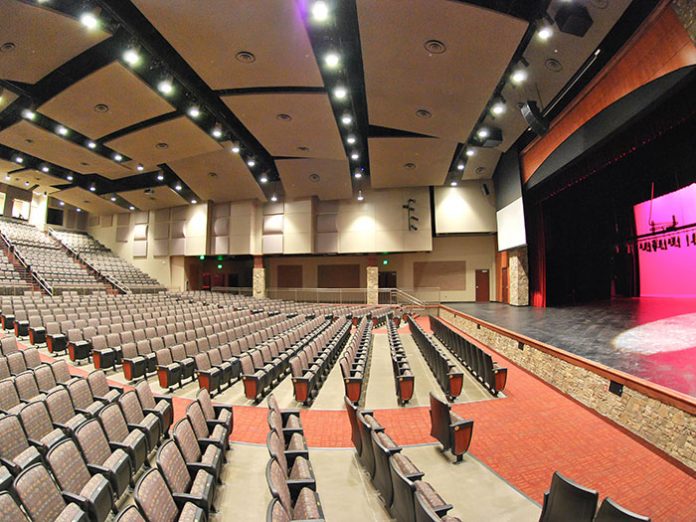 The county seat of Union County, Blairsville is nestled in the Blue Ridge Mountains of north Georgia. Known for its natural beauty, outdoor activities, and the oldest working courthouse in Georgia, it is also the home of Union County High School’s new performing arts centre, which features Renkus-Heinz VARIAi modular loudspeaker arrays.

“The entire building is new,” said Frank Campo, Jr., VP of Electrical Engineering at Southern A&E of Austell, Georgia, the full-service architecture and engineering firm behind the building and the sound system. “The auditorium is a multi-purpose space, used for assemblies, movies, concerts, and even a local church’s services on weekends. It seats 985, all on one level, with no balcony, sloping toward the front and raked toward the back. The room is 115 feet deep and about 75 feet wide, so it’s relatively narrow. The side walls are somewhat parallel but acoustical panels help a lot.”

“The acoustics are more difficult toward the back because of the lowered ceiling,” noted Southern A&E Electrical Designer Jason Leatherwood. “With other loudspeakers, we would have had issues with sound hitting the side walls. One reason we liked Renkus-Heinz VARIAi is that we could change the width as we went higher in the stack.”

VARIAi 101 full-range arrays are available in three vertical cabinet angles: 7.5, 15 and 22.5 degrees. Southern A&E chose four VARIAi arrays, with a VAX101i-7 on top, two VAX101i-15s in the middle, and a VAX101i-22 on the bottom, equipped with the unique VARIAi 90-to-120-degree transitional waveguide and configured as a horizontal centre cluster. This enabled them to customise the pattern for each coverage area.

“In the centre array the top cabinet has a 60 degree horizontal pattern, the next box down has a transitional 60 to 90 degree waveguide, the third box has a 90 to 120 waveguide, and the bottom cabinet in the array has 120 degrees of horizontal coverage,” explained Brian Phillips, Founder and CEO of Greer, South Carolina, theatrical systems integrator Productions Unlimited, which installed the system. “It was good to have those transitional waveguides as the intermediaries between the top and bottom boxes.”

“It covers the middle of the left and right seating sections and the rear,” explained Jason. Renkus-Heinz PNX121 two-way Complex Conic loudspeakers, flown on the far left and right, cover the first 25 percent of the front. “They’re pointed in to avoid splashing,” he added. Four Renkus-Heinz TRX61 two-way Complex Conic loudspeakers, mounted in the stage lip provide coverage to the front rows.

“Technically it’s an LCR configuration plus subs and front fills,” continued Jason. “But the system has individual control so you can have just the L/R, or just the centre cluster, or the whole system.”

Sub-bass is handled by a pair of Renkus-Heinz DRS18-1B direct-radiating subwoofers, hung to the left and right of the centre cluster to account for the relative narrowness of the room. “We tested with a Batman movie that has a lot of low-end sounds,” Brian said. “And the subs did an excellent job. The system is great for cinema.”

All speakers are powered by Lab.gruppen amplifiers. “We did not go with self-powered speakers mainly because the speakers are flown high, and we wanted to leave easy access to the amps,” recalled Jason. Biamp Tesira DSP handles speaker processing, and everything is tied into a Crestron automation system. An Easy mode enables users to run two wireless mics, the video system, and the main speakers without having to operate the console.

The results were all the team had hoped for. “VARIAi arrays are easy to hang, and they look good; they’re not intrusive. And they provide awesome sound,” declared Jason. “I was impressed with the uniformity of coverage; we couldn’t find a dead spot. We pushed the system pretty loud, and it was really clean.”