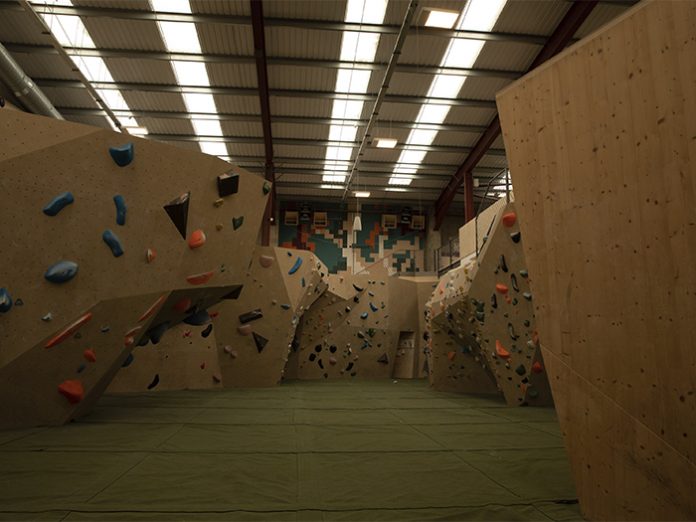 Flipside Soundsystem has upgraded the audio system at Yonder in London, helping the climbing gym defeat a noise problem it had with its residential neighbours. The systems integrator designed and installed a distributed sound system based on equipment from Yamaha and Sonance to cover the challenging space.

“Yonder is a very tall space for a bouldering gym,” said Flipside Managing Director, James Cooper. “It has a double height ceiling and is a large space with a tin roof and a new housing development over the road. If you don’t control the space right and keep the sound where it needs to be in that space, you’re going to have issues with people over the road.”

“We had an old system that was part of a rig for raves and warehouse parties and it just wasn’t fit for purpose,” recalled Josh Glanvill, Communications & Community Manager at Yonder. “We’ve got a big space that we need to fill and it meant that the sound would bounce around, it was really low end heavy and it wasn’t balanced properly. That meant that we were getting complaints because to be able to hear the music from the big sound system, you had to have it louder.”

To overcome this problem, Flipside created a solution that would be much more directional, while also being tailored for the space. “It was really nice to be given the opportunity to put something in that’s basically just a fairly simple distributed sound system that at least was designed for the space,” said James. “It covers all of the areas nicely to actually give you decent audio quality throughout the space, which is quite an unusual broken up space.”

The solution revolves around Yamaha VS6W and VS4W loudspeakers with control via the manufacturer’s MTX3. In addition, there is a Sonance PS-P63T pendant speaker that was selected to solve a specific problem. “We’ve installed a single pendant speaker in the middle of the room because there is absolutely no other way to cover it,” explained James. “It’s just about designing the system for the space and height was a challenge in there, hence the pendant speaker. You do have a lot of wall space and you’ve got upright columns in there, but the central area was tricky. It is just shooting that sound straight down into the mat, but it meant that there is a really nice spread. When you’re walking round it’s really seamless.”

The result has seen a much-improved experience for Yonder’s customers. “The feedback from the customers is that they can hear the music,” said Josh. “Before it would be rare to see climbers having a little dance because they couldn’t really hear the music, just background noise. Now, we get really clear definition and you can hear which song is on. It means we can play a wider variety of music as well, it doesn’t just have to be bass heavy stuff.”

The main benefit though has come from the noise levels outside the building. “There’s been no comment on the noise since so we think they can’t hear it anymore, which is absolutely one of the things we wanted to make a mark with,” reflected Josh “It’s really helping with our relationships with our neighbours, we’re getting on a lot better with them.”