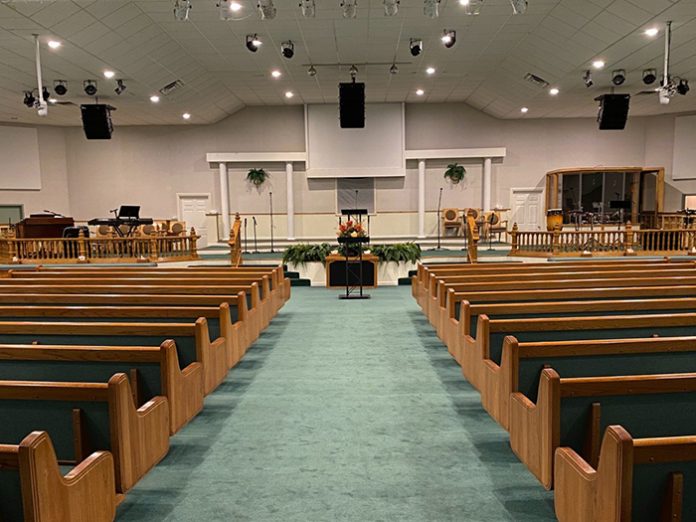 Pentecostals of Brunswick, a growing church in Brunswick, Georgia, worships with a new dBTechnologies audio system installed by Allseasons Audio of Jesup, GA. The system is an LCR design with twelve DVA T8 line array loudspeakers supported by a pair of DVA S30N subwoofers.

Owner Brian Bush said the dBTechnologies system replaces a 15-year old design that had poor coverage and sound quality. “In one part of the church, you’d have 90dB and a few feet away it might be 98dB. So, it was really harsh,” he said.

Before the installation, Brian did a demonstration for the church and noted: “The dBTechnologies loudspeakers sold themselves.” Bush used dBTechnologies Composer software to design and optimize the system. And he says the installation and rigging was easy, “Installing a DVA system is very simple; just kind of plug and play.”

The church has a full band, praise singers and choir and Brian mixes most services on an Allen & Heath GLD 112 digital mixer. He mixes instruments left and right and routes voices to all three arrays. The band has in-ear monitors mixed on Allen & Heath ME-1 Personal Mixers.

Brian is very pleased with the new system and says Pentecostals of Brunswick plans to renovate its auditorium to expand seating, add dBTechnologies floor monitors and install a second DVA system in the church’s gymnasium. He commented: “Everybody says the new system is a night and day change for us. The coverage is even, the sound is clear and it doesn’t hurt your ears any more. And, I can’t say enough about the DVA S30 subs. They’re phenomenal!”