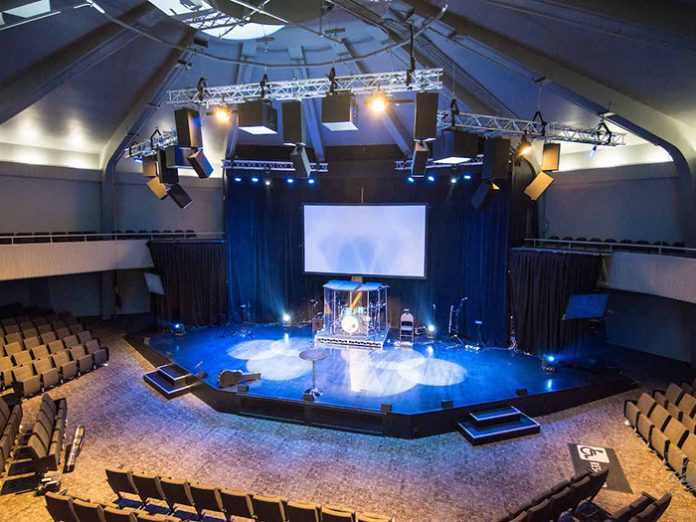 At a time when the background noise in audio is all about three dimensional sound and immersive experiences, arguably an extravagance suited to famous concert halls and exotic experimental music, it is contrary to the flow that we should encounter a d&b audiotechnik Soundscape system being applied at a church in Calgary, Alberta.

Thriving it may be, yet the pastoral team at First Assembly, Calgary is not prone to moments of irrational exuberance. For them Soundscape provided an entirely affordable solution to a seemingly intractable issue between acoustics, worship and sound reinforcement.

Justin Wells, First Assembly’s Technical Director, saw it as an uncomfortable divide between parts of their congregation and the heart of music worship. “Music is a huge part of what we do and within our church we have highly skilled musicians. For people who come for that, it has the potential to be inspiring. For our Sanctuary, what we sought was an audio system that could place everyone in the sweet-spot of the sound image, something that could reach those sat at the periphery of our 240º fan shaped room and give them that inclusive experience.”

Justin and Executive Pastor Shane Penney called upon the services of Sapphire Sound, an audio, video and multimedia specialist headquartered in Abbotsford, British Columbia with a permanent office in Calgary. “We had worked with the Church on a number of things in the past,” explained Ben Burrell of Sapphire. “Lighting upgrades, small pieces of kit here and there, that sort of thing – but this was to prove a project of different magnitude.

“They first came to us in early 2017 and requested we look at updating their sound reinforcement system. They really wanted a quality experiential dimension to audio and imagined stereo imaging for everyone. Our analysis showed that while this was entirely possible, the room dimension and physical shape would require an unusually large number of cabinets to achieve what they wanted. It would also be a remarkably complex system to manage.”

Ben continued: “We completed the assessment right about the time of the official launch of d&b’s Soundscape system. Sapphire has been providing d&b solutions since 2013 when we installed a system for Westside Church at The Centre for Performing Arts, Vancouver, BC. While we had no direct experience with Soundscape we have great confidence in d&b; everything we had used from them so far performed exactly as they promised it would. The functionality of their object positioning tool within the En-Scene module of Soundscape presented a much more manageable solution to the dilemma of First Assembly, and in many ways a better and more creative one.”

Justin took the proposal in stride. “When Ben first presented the Soundscape concept it was not simply ‘another way of achieving what we aimed for’. We had started to see the conversations in the pro audio press about so called immersive sound experiences, so even though it was all pretty new we saw the potential. Looking at the d&b online videos it was clear this was something else.” Justin arranged for Ben and Shane to attend InfoComm and witness a d&b Soundscape demonstration.

“We had already become convinced this was the way to go,” said Ben. “The demo was the final stamp of approval. Staged in 360º, it was a very cool experience. Although the presentation was more generalised about what could be achieved with En-Scene and En-Space, it was also apparent how this system would transfer into our church and the impact it would bring.”

Ben received the green light two days later and Sapphire placed the order with d&b audiotechnik Canada. “Although this was to be our first Soundscape installation, and the first in a House of Worship for d&b anywhere in the world, one element was in our favour. Typically Soundscape requires more channels of amplification than a more conventional point source solution. But such a conventional solution to First Assembly’s listening area was already complex enough that a high amplifier count was a given; in fact, using Soundscape has reduced the number of cabinets required and consequently reduced the amplifier count. The only cost impact was the d&b DS100 signal processing engine and the En-Scene license.”

“We didn’t want to go halfway and then find we had to go through the process again in five years’ time because we never achieved our goals the first time around,” said Justin. “With the audio system we made a clear decision that it was the most important component of the changes we were making and as such it was an easy decision to postpone some investment elsewhere. It was a sacrifice, but a small one and the cost was not a huge impact at all, certainly not compared to the impact the system has had. Never a deal breaker, we are really pleased.

“In terms of installation, everyone, top to bottom, the church elders, the congregation, people who choose to come from out of town – and we get a lot of them – really enjoy it and we constantly receive compliments on the listening experience. We value excellence at First Assembly; this brings music to a place at the heart of worship. Excellence in itself will inspire others to strive for excellence in themselves and their wider community.”