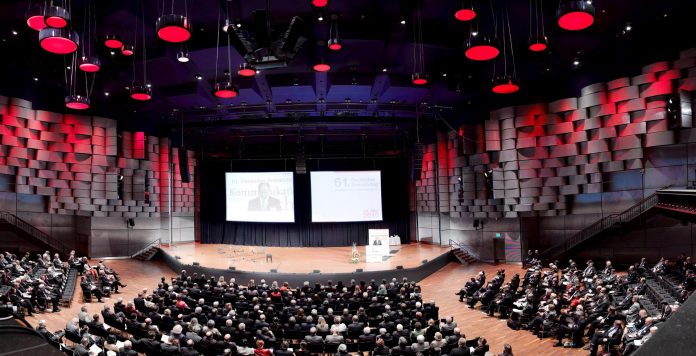 Described as ‘in the daytime a modern convention and congress centre, in the evening a classy concert and event location’, Eurogress Aachen is a major multi-space venue in Germany’s westernmost city. The installation of a pair of Yamaha CL5 digital mixing consoles has brought the mixing facilities in its main halls right up to date.

Eurogress Aachen’s many spaces range in size from the Europa, Berlin and Brüssel halls (which accommodate up to 1700, 650 and 430 people respectively) to a number of rooms of varying smaller sizes. For the past 13 years, the Europa and Brüssel halls have each featured a Yamaha DM2000 digital console with AD824 and DA824 I/O units, but the recent installation of a CL5 console with Rio3224-D in each hall by Köln-based Teqsas GmbH has upgraded the facilities.

A DME24N digital mixing engine was already in use as a central matrix, managing the network of analogue feeds between the various spaces. This was fitted with a Dante-MY16-AUD interface card, allowing seamless integration of the Dante network for the new consoles and R-series units into the existing infrastructure.

“The Eurogress sound engineers were comfortable with the DM2000 and so, when they compared the current consoles from several different manufacturers, they preferred the Yamaha CL series,” says Teqsas technical director Rainer Laschet.

“They found the CL5 easy to transfer to and were very impressed by the ease of use, the flexibility and the neutral sound. For them the Dan Dugan automixing functionality is particularly useful for conferences and debates, which are a key part of the Eurogress ‘daytime’ role.”