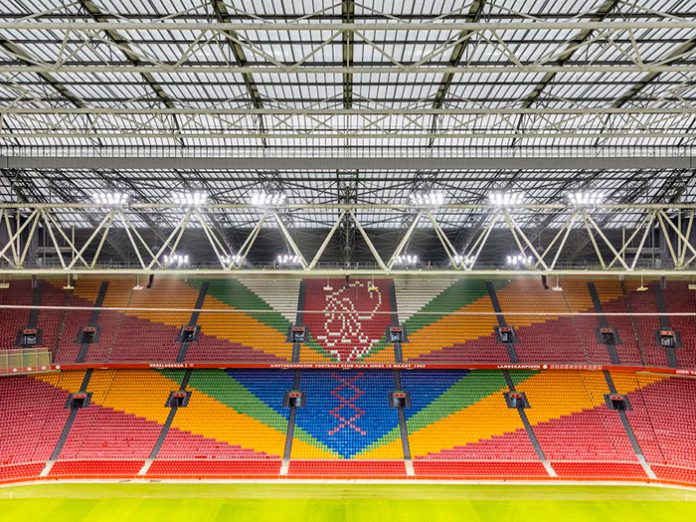 Home to AFC Ajax, Amsterdam ArenA is a world class stadium and the preferred venue for the Dutch national football team’s international fixtures. As part of its ongoing upgrade its recently installed a new audio solution based on the d&b Y-Series system.

Production Manager at Amsterdam ArenA, Tim Oosterop: “Like our LED screens, or escalators, audio investment is not something you can charge for, it doesn’t translate directly into revenue, but it does see the audience come earlier and stay longer. If they’re here that’s good for revenue, and makes best use of the facilities.

“Ajax already has its own video production department and puts a lot of work into the pre-show environment. Entertainment is the key component and quality audio is a big part of delivering that experience.”
Looking toward a new audio installation, Oosterop, and Head of Technology Martin Wielaart, defined three main objectives:
1. Compliance, specifically to UEFA/ FIFA regulations for performance and intelligibility, and adherence to national and international safety standards for evacuation systems;
2. Address the venue’s atypical acoustics, difficulties that could not be solved – in realistic financial terms – through current construction techniques;
3. Enhance the stadium’s reputation as a host of other entertainment events – especially concerts – with an acknowledged leading audio brand.

To address the requirements of safety and conformity the arena engaged the services of RH Consulting, a specialist practice that advised LOCOG for the London Olympics in 2012.
“Initially we created a specification document to cover both performance of the system, and compliance with the regulations, including Dutch national regulations,” explains Roland Hemming of RH Consulting. “The document was written in a manner suitable to a project as large and complex as this venue. We created three versions, one for the local safety authority, a second for the bidders so they knew how to comply, and a third for FIFA and UEFA.”

“As far as the challenging acoustics of stadium venues are concerned,” adds Oosterop, “we wanted a system in place that allowed us to clearly show concert organisers, band managers and event promoters, that we had invested in, and made serious inroads into making it possible to achieve the highest quality sound.

“For us that meant it was important to have an installed audio system from a brand name that is recognised as superior by the touring industry. Through our research we observed that for a significant number of years d&b audiotechnik has been identified as number one in the industry, with three other close contenders, all of whom were invited to tender.”

Oosterop says the fact the d&b ArrayProcessing software interfaces invisibly with the arena’s existing MediaMatrix management system facilitated a simple and easily executed route to accommodating a variety of event formats, without compromising safety standards. “With what we have now, we can present acoustic models and predictive scenarios to provide those planning to bring their shows here. We have an audio infrastructure that allows them to plan for best sound. By having all the modelling software and associated data, we enable them the time and space to plan accordingly.

Stefan Goertz, Head of Education and Application Support at d&b explains how flexible formatting was realised in the system design. “To make the switch to concert configuration easy, three of the line array clusters pivot. These turntable arrays are an easy principal; simple mechanical pins are pulled by a rope from the catwalk, and a second rope allows you to manually turn the array; the pin is sprung loaded and will click into a preset second slot to lock the array in concert orientation. It’s a very reliable manual process; no need for complex electric motors linked to positional controls. At the end of the football season the arrays can be quickly and easily repositioned in readiness.”

“The quality of the d&b system was not just a few steps up in terms of sonic delivery, there are other benefits, not least massive savings in power consumption,” adds Oosterop. “The old system, in order to comply with evacuation regulations, had to be on 24/7 so that if you hit the evacuation button the response of the system was immediate.

“With the new d&b solution it can be off when not in use. At any time, 24 hours a day, 365 days a year, if you hit the evacuation button the system responds in half a second. Not only that, for smaller events where perhaps just part of the stadium is in use, the system is zoned, so we have default programmes within the evacuation control customised for us by Ampco/Flashlight (the arena’s audio service provider), that trigger the evacuation system to move people out zone by zone.

“Obviously, the big saving for us is in not having the system on all the time, but we also find that not only is sound improved throughout the venue, but power consumed during non-events is lessened. Audio power consumption has been reduced by 85%. Not only is that a huge financial impact, it’s also a great ecological result. One of the arena‘s aims is to be carbon neutral; we already have solar panels and wind turbines in place. Now we are one step closer.”