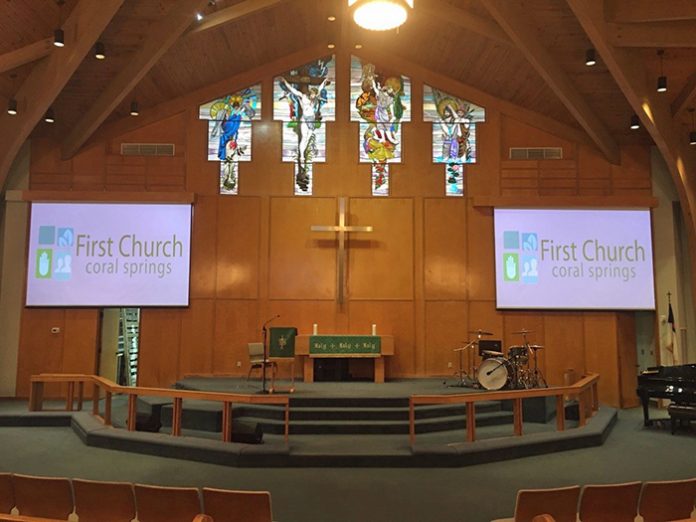 Founded in January 1969, First Church Coral Springs has experienced dramatic growth over the years. While the original church—known as Robey Hall—continues to serve a number of important roles on campus, a larger sanctuary was constructed and, these days, serves as the primary worship space. Rain accompanied by lightning are routine occurrences in Southern Florida and, occasionally, lightning strikes cause electrical outages and related issues. Such was the case recently, which required the replacement of the church’s projectors—resulting in the deployment of new equipment drawn from the catalog of Rancho Santa Margarita, CA-based Eiki International, Inc.

Creative Sound and Lighting Solutions of Cape Coral, FL, an AV installation company that is primarily focused on the House of Worship market, was contracted to specify and deploy the church’s new equipment. After meeting with church management to ascertain their goals and objectives, the team decided to deploy a combination of two Eiki EK-600U 6,000 Lumen DLP projectors, one EK-601W 5,500 Lumen DLP projector, and an LC-WBS500 5,100 Lumen LCD projector. Rob Robinson, Creative Sound and Lighting Solutions’ system designer, discussed the project.

“We were already planning on the install for the Robey Hall,” Robinson explained, “but about two weeks before that scheduled installation, the main sanctuary, which is located in an entirely different building, took a direct lightning hit. After some extensive late night troubleshooting with the client via Facetime, we uncovered numerous issues in the video system. Lightning is a very complicated thing and it may hit something very hard while leaving others entirely untouched. In this case, the audio system was fine, but every video component was either shot, or somehow stressed and not operating properly.”

“The strike also took out a great deal of sanctuary lighting and two very large air conditioners,” Robinson continued, “so we decided to order replacement items and simply combine both the Robey Hall and the main sanctuary projects into a single endeavor. Lucky for us, Eiki jumped into the details to help determine what would be suitable replacements. Better still, we were able to have three projectors that have the same technology, so the rear facing confidence display now looks like it matches the main displays. Previously, the church had two different brands in use and the inconsistent image quality really bothered me. With these new Eiki projectors, that’s a thing of the past.”

In the main sanctuary, Robinson and his team placed two Eiki EK-600U DLP projectors that serve as the front projectors while the Eiki EK-601W handles confidence monitoring—enabling the Pastor and other people on stage to stay on message. He described the setup, “The EK-600U’s hang from the ceiling using Chief CMA700 adjustable poles in conjunction with a Chief universal mount attached directly to the projector. Both units face the front of the space and project onto 12-foot wide motorised screens. The EK-601W faces the rear of the space behind the congregation and projects directly onto  the white painted wall. Even projecting onto the wall, it looks great. For the confidence display, we used a Chief CMA395 angled ceiling plate, dropping a 5-foot- long, 1.5-inch steel pipe to another Chief universal mount.”

According to Robinson, Robey hall has a series of wonderful old wooden beams throughout the ceiling area. Hence, the Creative Sound and Lighting Solutions crew affixed the Eiki LC-WBS500 projector directly to one of the beams and, for this, they used another Chief CMA395. This time, however, they used the mount in its 90-degree orientation using only a 2-inch NPT threaded nipple, which then attached to another universal mount on the projector.

As noted previously, Robinson consulted Steve Rubery, Eiki’s National Sales Manager, on this project. Aside from the excellent performance of the projectors, Robinson was very appreciative of Rubery’s assistance, “Steve helped us with the calculations and made certain that everything would be flawless, which it was. Eiki’s customer support services have always been excellent and this is yet another example of that commitment.”

The First Church Coral Springs project took place in early September 2016 and the equipment was placed into service immediately after. Since that time, the Creative Sound and Lighting Solutions has received numerous compliments. “Our client is delighted, “Robinson reports. “The new projectors fit the screens far better than the ones we replaced, so the overall result is one of bright, clear, visually appealing images, lyrics, and related content that really helps engage the congregation. Our client couldn’t be happier.”