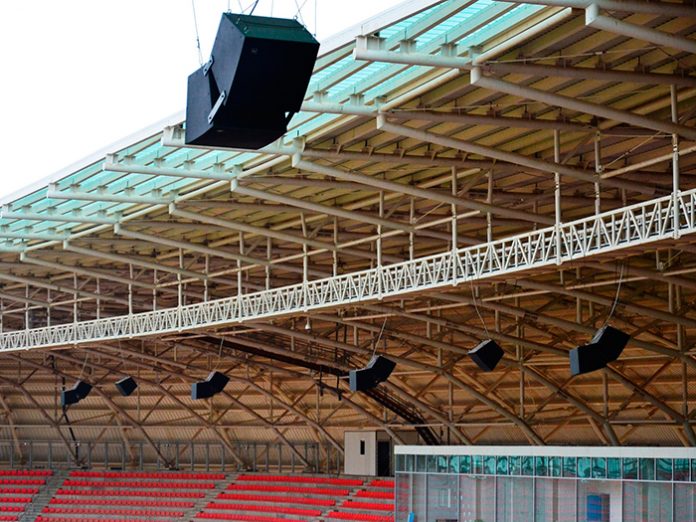 The recently opened Karbala Olympic Stadium in Iraq is a 30,000-seat venue designed to host major sports, music, religious and youth events. Audio for the project was provided by Baghdad-based APCO electronics, which provided acoustics design and participated in the actual installation as well. The company chose a sound system from electro-voice, creating a multi-zone digital audio system based around the Iris-net system control and supervising software and electro-voice EVH-1152 horn-loaded loudspeakers. The selected sound system stands for reliability, superior sound quality and scalability to future requirements. In addition, electro-voice amplifiers, microphones and wireless systems were also utilised.

The primary system requirement was that the sound system would meet FIFA football standards, which require 92 percent direct coverage and high intelligibility, with a speech transmission index of 0.50 or higher. The installed system exceeds those standards, delivering 95 percent coverage with a speech transmission index of 0.80, indicating excellent speech clarity. Next to public address announcements, the system should also be used for voice alarm and evacuation purposes.

Using Ease simulation software, the APCO team developed a design based on the electro-voice EVH-1152 loudspeaker system, a two-way 15-inch horn-loaded design available in six dispersion patterns. For the specific grandstand angles at Karbala Olympic Stadium, APCO used 24-each of 60×40 degree and 90×90 degree coverage patterns. Paired together, this combination provides direct, full range coverage to all seating locations, including the difficult corner areas. In addition, two EVH-1152 loudspeaker systems with 90×90 degree dispersion are deployed individually at either end of the field to deliver audio onto the playing surface as needed.

The entire sound system is network together using electro-voice N8000 Dante-enabled DSP Matrix controllers and powered by electro-voice CPS series amplifiers with RCM-810 remote control modules. The N8000 from electro-voice provides complete system routing and control via graphical user interface in Iris-net software. The main loudspeaker system is divided into four zones, each with its own N8000 from electro-voice and either three or four amplifiers, with the east side zones requiring and extra amplifier to feed the field speakers. All amplifiers are connected to their associated N8000 via a gigabit ethernet switch to handle signal routing, with redundant connectivity to ensure a reliable digital network. A fifth N8000 is stationed in the stadium’s main control room, and acts as the master unit for the entire system routing the audio to each of the four individual zones. APCO programmed the signal processing core to handle all required audio sources, including microphones, PC-based streaming audio, emergency notifications and scoreboard audio.

Karbala Olympic Stadium represents the largest Dante system that APCO electronics has designed and installed. Thus, the feeling of accomplishment was strong when the APCO team finally heard the Iraq national anthem being played through the electro-voice system at the opening ceremonies. That feeling was reinforced shortly after the event when APCO received calls from the minister of youth and sport, and from local broadcaster Ishtar Media, thanking them for the outstanding audio quality.