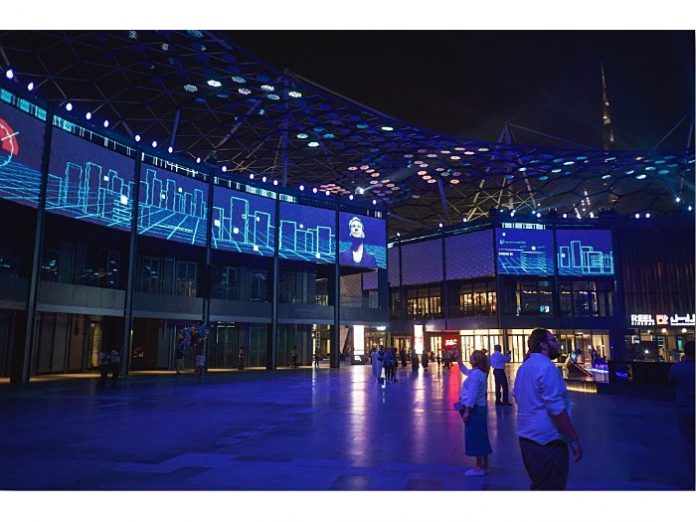 Making its mark as Dubai’s latest shopping destination, City Walk presents an impressive visual feast in multimedia for its visitors. Amongst a dizzying range of digital media elements combined to deliver more than 100 million pixels, a total of 30 Digital Projection projectors form the backbone of the destination’s jaw-dropping connected displays.

The scope of the project grew rapidly in ambition. The Digital Projection projectors – all from the Titan range – were initially specified by Dubai integrator RDK International following ‘proof of concept’ demonstrations by Digital Projection’s Middle East team.

To ensure a holistic integration of all the individual features planned for the destination, Float4, a Montreal studio specialising in digital experiences was brought in to oversee the project. In turn, Float4 employed a fellow Montreal company XYZ Cultural Technology, which handled much of the system design and integration required.

“We came in at a point where a lot of decisions had been made with regards to each individual feature,” explained Alexandre Simionescu, co-founder of Float4. “Our role in these projects is really as an executive producer. We make sure the technology and content works together and is properly designed. We understand the creative as well as the implications of the technical.”

Owned by Dubai-based holding company Meraas, City Walk is comprised of a network of streets in Dubai containing cafes, restaurants, shops, entertainment areas and even a gaming park – surrounding a central plaza complete with water feature.

The vast digital canvas that unites the area is divided into three sections: An entrance hosts a vast LED screen feature named ‘The Gateway’; which leads into ‘Show Street’, a walkway flanked by retail and restaurant spaces; which in turn opens out on to the central area and entertainment hub: Place de Lumière.

On Show Street, 12 Digital Projection TITAN 930, 15,000 lumen, WUXGA projectors, housed in Tempest enclosures, beam down onto the floor. The projection combines with LED elements running along the street and LED strips, about 50 pixels high, which are large enough to show moving images.

Digital Projection was involved from the start of the project creating the design for the projector components. The company’s regional manager for the Middle East and Turkey, Tim Wood, proposed the units based on their bright light output and small, lightweight chassis, essential when considering the positioning of the units on the ‘rooftops’.

The projectors were able to be mounted in an unobtrusive way with minimal effort and the built in ColorMax technology ensured that they could all be easily calibrated to ensure a perfect, seamless blend across multiple channels,” he noted. “Additionally, the dual lamp system allows for redundancy ensuring the show can run uninterrupted should there be the need to change a lamp.”

Shows at City Walk take place at regular intervals every evening: A punchy sound system fires up and one of the three shows created by Float4 plays across the facades of buildings and LED displays. Digital Projection Titan units were again selected for the façade projections with a total of 18 TITAN 930 projectors mounted around the plaza. These combine with LED screens and about 120 lighting features to create one digital canvas.

“At this point the area’s water feature also comes to life and ‘Show Street’ and ‘The Gateway’ play content based on the aesthetic of the show. “All those elements give us a lot of depth to create these shows,” concluded Alexandre.