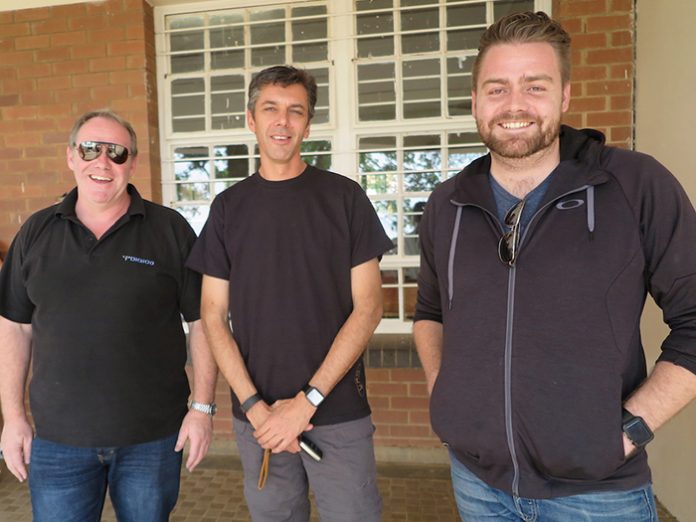 DiGiCo’s Ian Staddon was recently in South Africa, his first visit since appointing DWR Distribution as the DiGiCo distributor for Africa.

“The trip for me was phenomenal,” said Ian. “I think it was superbly organised and the number of people that we got to see was great. The vibe for DiGiCo around the country is really strong.

Speaking to the engineers there was nothing but positivity and they all loved the SD range. The S series is obviously new and we’ve had some teething problems, but those have been addressed with the latest software. It seems that more and more people are getting to work on the consoles and they absolutely love them. The name is well known, but there is a change happening in South Africa with an increasing momentum behind the brand”.

Ian has been in the audio industry for over 25 years and at DiGiCo for the past five. He always had an interest in music and electronics, but remembers working at a petrol station in the UK for a bit of extra cash when he was about 18 years old. He was filling up people’s cars with fuel when life took a turn. “This guy, who drove a brand-new Porsche, always used to come in, and one day I asked him what he did for a living,” said Ian.

After being told, Ian turned up at the “Porsche driver’s” house one day, a gentleman by the name of Ivor Taylor (who now owns one of the top Post Production facilities in London, “Grand Central”). “I said, ‘Give us a job,’ and he turned around and said, ‘Give me a CV,’ and I said, ‘Well here it is.’ I gave it to him there and then because obviously, he only really knew me from seeing me every weekend filling up his car, but I was quite well qualified.” As it turned out, Ivor was one of the owners of the company called Bandive/Turnkey that manufactured audio mixing consoles and were looking for a purchasing assistant. Ian joined the team and became the production manager in a fairly short period of time.

The same company, three years later, was bought out by Harman. “Basically, we were making the mixing consoles branded “Seck” and they evolved once Harman bought Soundcraft a year or so later into what became the Spirit range of mixers,” Ian explained. “So I ended up working there, in production to begin with, as Harman had bought MBI broadcast consoles which came

with Allen & Heath and worked to produce the MBI Series 30 broadcast console for a large project in RAI Italy. Having completed this project I gradually moved into sales.”

Ian was at Soundcraft for 11 years, and by then Harman had also bought Studer. Due to his experience in sales but also the knowledge he had gained through the MBI broadcast projects, Ian moved from his then position of VP of Product Development at Soundcraft, over to Studer to work in their sales team. “Having done some work within Soundcraft for Studer, Harman asked me to go across on to the Studer sales side and I soon became VP of Sales for Studer. I was at Studer for about 9 years, and thoroughly enjoyed my time there, but I felt that I had done what I could there and it was decision time for me. I was at that age when I either stayed working within Harman, a large corporation for the rest of my career, or made the jump for a new challenge!

Ian had known the original investor/founders of DiGiCo, Bob Doyle and Dave Webster for ages. “Bob Doyle had always been trying to get me to go and work for him at Midas where they came from and I never did. Also, after DiGiCo had started, I continued to talk to Bob and more often than not to Webby at trade shows, always joking about working together and then later on to James Gordon, who’s now our CEO, but the time was never right. Once again, James and I had another discussion late at night, which surprisingly, I remember well, especially as it was at the infamous Marriott pool bar during the NAMM show. James was very sympathetic and understanding about the recent loss of my eldest daughter and appreciated that my personal circumstances had not allowed us to work together, but the offer was still open whenever I was ready! The rest, as they say, is history.

“I’ve now been with DiGiCo for over 5 years and it’s a very different company to that of a massive organisation, although we are growing fast. It’s more like a family really, and I have a great team, which makes it a great place to work.” Duncan Riley of DWR Distribution has not looked back since getting to know the DiGiCo team. “It’s such a pleasure to work with someone as humble and as knowledgeable as Ian,” said Duncan. “It’s all about the relationship between the manufacturer and distributor and DiGiCo really understand this. I think it’s great to work with people like that”.