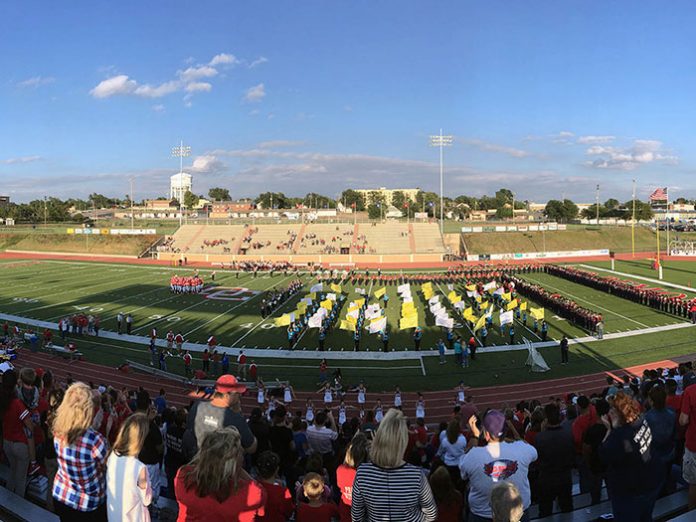 Due to speaker placement restrictions of the old system, louder volumes led to several distinct arrivals from the various loudspeakers, which wreaked havoc on the system’s intelligibility and made music sound sloppy. In addition, the desire for a more modern full-range frequency response, with smooth, articulated highs and jaw-dropping, thundering bass, drove the decision to pursue options to replace the old system which was tailored primarily for speech.

“We’ve had a great relationship with the school officials who are responsible for Memorial Stadium, and this upgrade started with a casual conversation,” explained Paul Colella, vice president with McClelland Sound. “They wanted a better overall audio experience, one that better matched contemporary expectations. We immediately looked at products from Danley Sound Labs to give them a zero-compromise solution within their budget.”

Colella and his team, including Rob Barton, lead system engineer, used measurements taken from site surveys, Google Earth, and SketchUp to produce models of the stadium for use within the free Danley Direct software. “We looked at several options, including loudspeakers mounted to the press box and a whole series of cluster options for the end zone,” he said. “A simple Danley J1-94 Jericho Synergy Horn looked like the ideal solution on paper. Danley’s regional rep, Doug Prewitt of Ludwig Marketing, coordinated an on-site demonstration of the product to showcase its performance. We were pleased that Doug Jones, one of Danley’s engineers, traveled to assist with the demo and share his wealth of knowledge.”

The demo proved the modelled concept beyond any doubt, and Dodge City signed off on the plan. McClelland Sound worked with the school district’s facilities department and chosen engineering firm to get the proper infrastructure in place including all structural, electrical, and mechanical needs for a safe and reliable installation. Once the structure was designed, McClelland Sound worked with Polar Focus to create a custom-mounting bracket that would sit on top of the I-beam and allow pan and tilt adjustments based on the loudspeaker’s centre of gravity. “During commissioning, one person was able to adjust the 720 lb. loudspeaker from a lift, aiming to our exact specifications with ease,” said Colella.

“Everyone involved is delighted with the outcome,” said Colella. “It’s a great system, with plenty of clarity, intelligibility, headroom, and musical impact. We were able to hear it clear on the opposite side of town during commissioning! The low end is boastful and impactful, which keeps spectators smiling”.