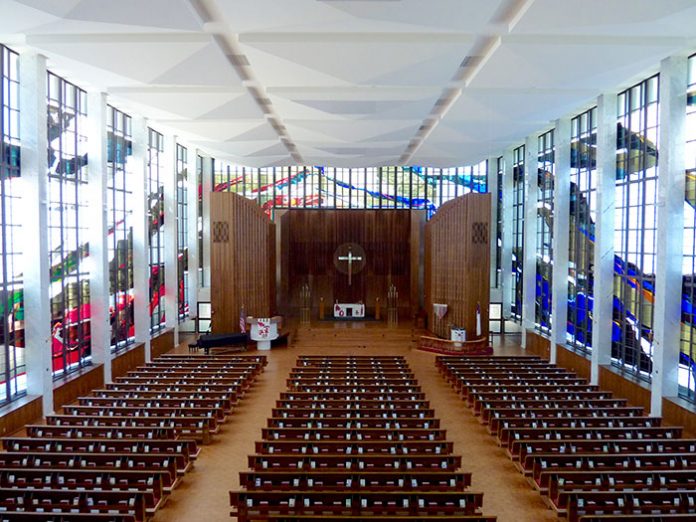 In the late 1940s, a small group of faithful founded this Methodist Church on a Dallas street called Lovers Lane. Though the Church has since moved several blocks away, the name remains a part of its history and culture.

The sanctuary at Lovers Lane United Methodist Church is a stunning architectural gem. Its soaring glass walls and 36-foot ceiling making it the largest freestanding stained glass structure in North America, but while the Church’s architecture is a thing of beauty; also present is acoustical challenges because its glass and hard surfaces create a reverberant chamber that wreaks havoc with intelligibility.

Shawn Slocum of Ford Audio-Video explained further: “We couldn’t do anything to impact the sanctuary’s unique aesthetics, therefore a ceiling-hung line array was not an option. The previous loudspeaker system approach, installed in the late 1990s, included large-format point source loudspeakers recessed into the ceiling, front fills in the forward organ towers, and a pew back system to fill in the outer seating areas. After looking at several alternatives, we determined that the same approach would be utilised. The challenge was how to improve intelligibility and SPL using the existing design.”

Shawn and his team’s solution to this dilemma: Fulcrum Acoustic’s AH-Series horn-loaded loudspeaker systems. The previous point source speakers were medium-long throw systems, but lacked the tight pattern control the space required, particularly in the mid and low-mid frequency range, but the AH 65’s 60 x 45 degree pattern covers the seating area and ends its range just inside the angular side walls, limiting early reflections and improving intelligibility. The pew back system adds coverage for the far outside seats, so a pair of Fulcrum Acoustic US212 subwoofers was installed in the front organ towers, adding low frequency reinforcement that the sanctuary had never previously enjoyed.

Shawn stated the new system delivers a marked improvement in both intelligibility and frequency response for parishioners seated in both the main floor and balcony areas. Shawn added that the next phase of the project would include several Fulcrum DX896 loudspeakers to provide greater forward imaging for the front third of the main floor.

The new system has already made a dramatic difference, so the team are excited to see the end result once the installation is fully complete.