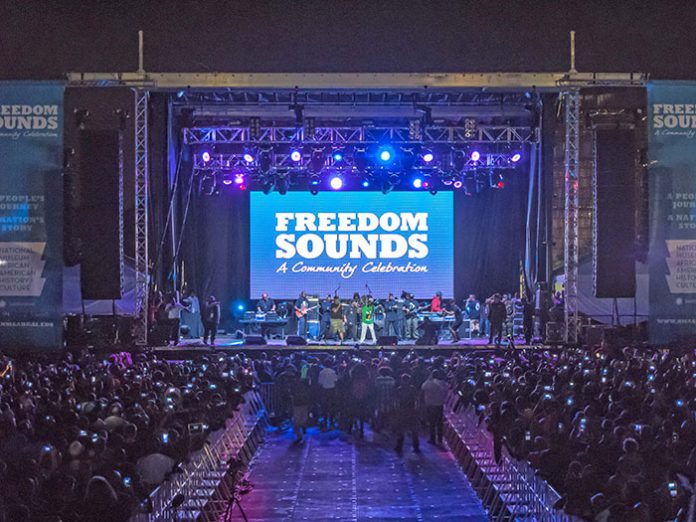 The National Museum of African American History and Culture (NMAAHC) is a Smithsonian Institution museum. Located on the National Mall, it has close to 37,000 objects in its collection related to such subjects as community, family, the arts, religion, civil rights, slavery, and segregation.  The museum opened September 24, 2016 in a ceremony led by U.S. President Barack Obama. As part of the grand opening festivities, the Freedom Sounds show – a concert featuring The Roots, Public Enemy, and Living Colour – took place before a huge audience. To ensure the best possible sound reinforcement, loudspeakers from the Aero Series 2 and Road Series catalogs of Valencia, Spain-based D.A.S. Audio were placed into service.

Audio & Light of Greensboro, NC, a full service A/V design, installation, and production company, was contracted to handle sound services for the event. Company president Jim Hoyle, who in addition to managing the company’s activities, also served as the FOH tech on this show. He discussed the project and his experience with the D.A.S. Audio equipment, which included Aero 50, Aero 40A and Aero 20A line arrays, UX-221A powered subwoofers, and Road 12A powered stage monitors.

“The Freedom Sounds show was a concert that punctuated a weekend of D.C. celebrations commemorating the opening of the National Museum of African American History and Culture,” Hoyle explained. “It took place from September 23rd through the 25th. Our setup included 24 Aero 50 line array enclosures – flown 12 units each for the left and right hangs. For low frequency support, we used 36 UX-221A powered subwoofers. These were positioned in stacks of two, positioned just over 3 feet apart on the downstage edge of the stage. The Aero 50 line arrays were provided by Ruben Silva of DBS Sound out of Irwindale, CA. Ruben is a great guy and was a big help to us on this show.”

Hoyle continued, “For out fill we positioned 16 D.A.S. Aero 20A line array enclosures—with 8 units for each of the two clusters. We also had a delay system, and this consisted of 16 D.A.S. Aero 40A loudspeakers. These were positioned in two hangs of 8 enclosures that were flown on two TMD-560 Guil Towers, which were positioned behind the FOH tower. For front fill, we deployed 6 D.A.S. Aero 20A boxes, and these were spread evenly across the front of the stage and positioned on top of the subs. Completing the setup, we used 20 of D.A.S. Audio’s Road 12A stage monitors.”

When queried about the attributes that made the D.A.S. Audio equipment the ideal choice for this project, Hoyle offered the following thoughts, “The D.A.S. Aero Series does an excellent job with a wide variety of music. Our stage for this event had performances by musicians from all over the world – ranging from acoustic folk music and Dixieland jazz to Rap, R&B and Heavy Rock. The Aero’s are able to reproduce the subtle nuance of an acoustic instrument as well as deliver the full force of a rock band at high SPL – all while sounding clear and natural.”

“D.A.S. Audio’s system designers did a great job voicing the loudspeakers in the Aero Series to sound similar, no matter which size box is being used,” he added. “While walking the coverage pattern, I was particularly struck by the seamless coverage between the main hang and the side-outs. There was no difference in sound and the transition was impressive.”

When working on a project of this magnitude, questions inevitably arise and, in this regard, Hoyle gives high marks for D.A.S. Audio’s customer support services. “D.A.S. is very committed to their dealers and end users,” he reports. “Roberto Almodovar and Carlos Henao from D.A.S. were both present at this event. This was obviously a high profile gig, but it’s not unusual to have the D.A.S. staff at a show watching how we use the gear and asking questions about what we would like to see in the future. They offer lots of training opportunities and are always available to answer questions. D.A.S. is really dedicated to our success.”

With the Freedom Sounds show completed, Hoyle reports the event was a huge success. “We are extremely happy with how this show went,” he says. “The rig sounded amazing and all the guest engineers loved it. None of them experienced any difficulty finding their mix. The audience loved it too. I received many compliments on the sound from attendees. We are very proud to have been involved with this historic event and are very pleased to have done it with D.A.S.!”