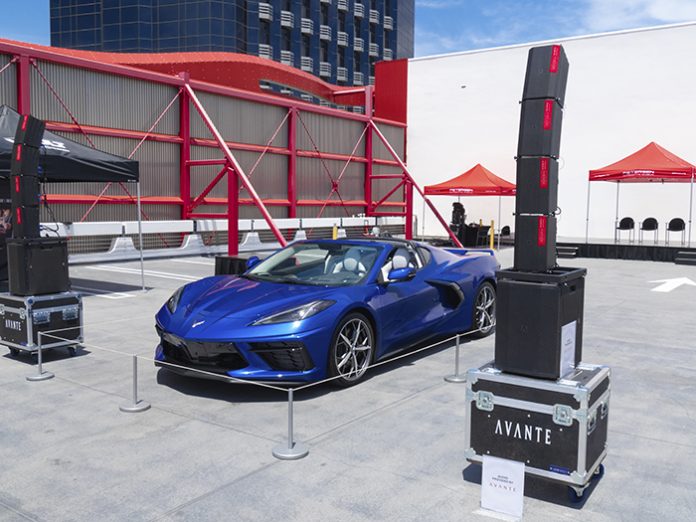 In July 2019 the West Coast public debut of the eighth generation of Chevrolet’s iconic Corvette sports car series took place at the Petersen Automotive Museum in Los Angeles, CA. The highly-anticipated C8, which is due to begin shipping next year, is the first mid-engine Corvette since the model’s introduction in 1953. It’s official West Coast public unveiling included both indoor and outdoor events, with audio for both covered exclusively by Avante Audio.

As this was an extremely important event for the Petersen’s team, lead AV/IT tech Nader Dalloul wanted to ensure that the audio quality was top-notch. Having previously always used small active point source boxes for the venue’s indoor audio requirements, the prospect of covering the museum’s large parking area with evenly-distributed sound led him to the 2019 InfoComm exhibition in Orlando looking for a new audio system. He wanted a compact and versatile line array product that would not only cover his outdoor requirements but offer a more robust solution for large events inside the venue.

Having explored all the options on offer, Nader found that the recently-released Avante Audio Imperio system delivered exactly what he was looking for. Consisting of three active speaker cabinets, the Imperio Series is a unique ‘mini’ line array system designed both for permanent installation and temporary event applications. The Imperio itself is a versatile array module loaded with a pair of 4.75” Neodymium woofers alongside six 1.75” IDVAT (Inverted Dome Vertical Array Technology) HF drivers, the Imperio Sub is a powerful sub bass enclosure featuring a single 10” woofer with a 2.5” voice coil and a built-in crossover, and the Imperio SUB210 is a dual 10” woofer model that can be deployed either vertically or horizontally. Only used All three feature internal Class D amplification and can be used together in multiple combinations to build systems suitable for a wide range of different purposes.

The flexible Imperio Series can be deployed in a variety of configurations, with a full range of flying hardware also available. However, for the Petersen’s Corvette weekend Nader decided to ground-stack four Imperio array elements on top of an Imperio Sub on each side. This meant that setup and teardown was extremely quick, allowing the system to be easily moved from the indoor to the outdoor location.

The indoor VIP event took place in the Bruce Meyer Family Gallery within the museum, which accommodated 300 guests. The Imperio system was used to provide background music, while the attendees arrived, mingled, and enjoyed food and beverages, and was then used to amplify a presentation by representatives from the Chevrolet Corvette team who took the avid audience through a detailed overview of the C8’s design and features.

“I was hoping to achieve a fuller, more complete sound by switching to a line-array solution, and that was exactly what the Imperio delivered,” explained Nader. “The sound was really good and totally filled the room. The system also offers exceptional intelligibility, which was important because the presentation of the car’s features by the Corvette team was the main feature of the evening, so it was essential that everyone in the room could clearly hear every word that was spoken.”

For the Sunday car show outside, Nader setup the Imperio system on top of its road cases to increase the throw and also augmented it with a pair of Avante Audio’s Achromic A10 full range active speakers. One was positioned around 100 feet from the array stacks and the second approximately 75 feet further back. He chose the ‘club’ setting from the internal DSP settings to enhance the bass response and setup time delays using his Behringer X32 console. Again, the system was used to play music as the soundtrack to the day as well as for microphones that were used for announcements as well as a panel discussion about the new C8.

Nader concluded: “When we took the Imperio System outside it really did throw the sound extremely well. Obviously, we didn’t want the music level to be too high, which is why we used a couple of the A10s to provide delayed in-fill and these performed very well too. It’s also worth mentioning that it was an extremely hot and sunny day, even by LA standards! But that didn’t affect the Avante equipment in any way, which is more that I can say for myself as I ended up sun burnt!”

The Petersen’s Zora Duntov Tribute Weekend proved to be a perfect demonstration of the audio capabilities and unrivalled flexibility offered by the Avante Audio Imperio Series: the ‘mini’ line array solution for every application.