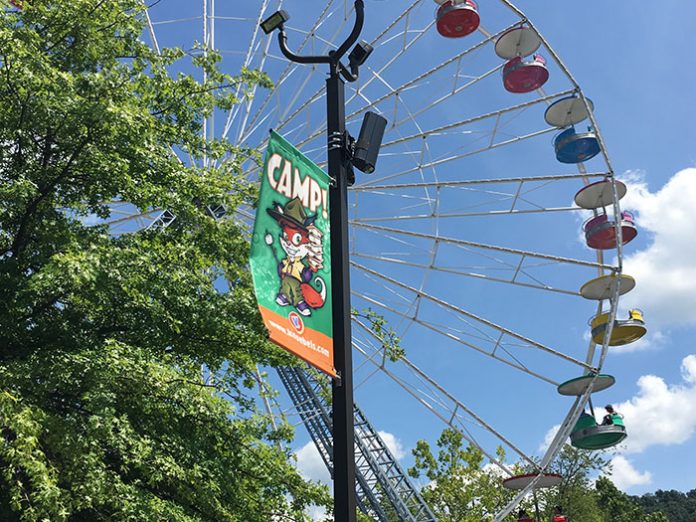 Knoebels Amusement Resort in Elysburg, Pennsylvania has completed the first phase of upgrading its park-wide audio systems. Located in the bottom of an abundantly green valley formed by two converging streams that flow through the very heart of the park, Knoebels is America’s largest free-admission amusement park, with over 60 rides, award winning food, swimming in its 900,000 gallon Crystal Pool, games, and gift shops. Visitors can also enjoy golf at Knoebels’ Three Ponds Golf Course.

Drew Kanaskie, Knoebels’ Audio Technician, was in charge of the project from conception to implementation, with design assistance provided by Moyer Electronics of Pottsville, PA. Drew explained: “The audio upgrade is planned for completion over several years of off-season projects. The first phase of the upgrade was to replace our aging 70-volt system, with a new system that has more comprehensive coverage and which provided an open platform that we can continue to expand. The 45-acre park began back in 1926 and has grown steadily ever since. Finding a way to reach thousands of park visitors today is a different puzzle to solve than it was just 10 years ago. Our goal is to be heard clearly, everywhere.”

After much research, followed by on-site evaluation, Drew settled on Community’s E SERIES column-format line source and point source loudspeaker systems. “We are able to create a canvas of sound using the advantage of E SERIES’ wide angle of coverage,” said Drew. “In the environment of an amusement park there is ambient sound coming from everywhere. To produce the clarity we wanted, it was decided to place a higher density of loudspeakers at locations closer to the listener. By locating loudspeakers at 10 to 12 feet above ground level we were naturally closer to the listener’s ear. This meant that we could typically use the underside of a building’s roof overhang, or just below the glass fixture of a light pole. We hid many loudspeakers on poles with banners affixed to them; an easy solution with the slender profile of the E SERIES line. The coverage pattern of E SERIES meant that we weren’t wasting audio power up in the air and were getting the broadest coverage with fewer units. By selecting a variety of E SERIES models we found that balancing the EQ for the total system was easy to accomplish. Once we had shaped the system for the smallest speakers, we basically enjoyed more low-end from the larger models without having to EQ each model separately.”

The first phase of Knoebels’ upgrade comprised 54 Community ENT203 loudspeakers, 74 ENT206, eight ENT212 and two R SERIES R.35COAX. Drew explained the distribution: “We chose ENT212 loudspeakers for large open areas that are required to reproduce voice and music. In the more intimate settings, below low roofs and in narrower corridors, we chose ENT203, and for all other areas we used the ENT206. In one location, where we have free entertainment performances several times each day, we selected Community R SERIES R.35COAX loudspeakers as ideal for the application. We have a fairly open space to fill and a concentrated crowd that is seated and facing one direction. The R.35COAX does a great job and is very efficient.”

The new sound system uses the existing fibre network. Drew commented: “Although the park already had a robust fibre network in place, a bit of additional work was necessary to make all of the equipment talk on the network.  In a time of audio over fibre, it is essential to have a reliable, high quality network. The Knoebels IT team created and maintains a separate network dedicated only to park audio use, and this is largely responsible for keeping the pulse of the system running.”

Drew concluded: “The E SERIES system in use throughout the park has performed excellently. We have all the clarity we wished for and the discrete installation is almost unnoticed. We are able to reproduce music with great fidelity and voice that really stands out when paging.”