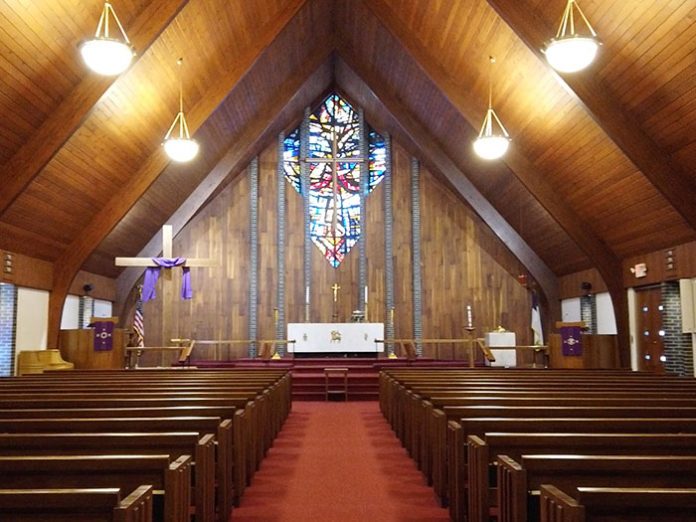 Sometime around 1730, John Feaster and his wife Rachel migrated from Holland to what is now Bucks County, Pennsylvania. Today, the Pennsylvania Turnpike runs through the community of about 3,600 people, located roughly halfway between Philadelphia and Trenton, that bears Feaster’s name.

A half dozen blocks North of the turnpike, in downtown Feasterville, St. Stephen’s Lutheran Church offers two traditional services each Sunday. Should you attend, you’ll hear every word clearly, thanks to the Renkus-Heinz loudspeaker system that audiovisual contractor Steeple Sound installed in 2018.

“This is the third sound system that the church has had,” recounted Steeple Sound’s Gary Creely, who designed the new Renkus-Heinz-based sound system. “The first system used the older column-style speakers, mounted on the side walls. A little later, they went to a speaker that was really close to the ceiling, so it was exciting all the surfaces up there. You were getting very little direct sound, except for a small portion of the room, and you were hearing all of the reflections off of that large ceiling area.”

“The room is not tremendously reverberant,” reported Gary. “However, it is somewhat long, and I wanted to avoid a delay set of speakers halfway back because of the challenges with time arrivals that you get into with a delay set. We chose a pair of Renkus-Heinz ICONYX IC8-RN digitally steerable arrays for the main portion of the room because ICONYX loudspeakers cover a wide area, and they also have good reach. We could cover all the way to the back of the sanctuary using a single IC8 cabinet on each side.”

In many church installations, the main loudspeakers are mounted on the front wall. But in Gary’s view, that design is not always ideal. “Generally speaking, we try to put the speakers in a plane that is in front of the microphones, rather than behind them,” he pointed out. “Sometimes, if you’re careful, with the ICONYX you can shoot beams over the microphones and not have an issue with feedback. But at St. Stephen’s, we wanted maximum gain before feedback.”

To attain this goal, Steeple Sound mounted the IC8-RNs on the left and right side walls, just in front of the stage area, near the front row of pews. The column arrays are painted white to match that part of the wall, so they’re visually unobtrusive. Gary would have preferred mounting them even a bit more forward, but because of the location of the door, that wasn’t practical. “It doesn’t cause a problem because the speakers’ dispersion is so wide they’re getting coverage even into that front row,” he explained. “That’s why we placed them where they are.”

Gary chose a pair of Renkus-Heinz CX41 compact four-inch coaxial loudspeakers to provide a bit of fill for the area behind the IC8 coverage area, where the pastor and people helping with worship sit. Each CX41 can deliver up to 89 dB SPL peak, more than enough to easily fill the stage area at St. Stephen’s. Another advantage is that the point-source loudspeakers are so small you barely notice them mounted just below the bottom of the ceiling.

The choir loft at St. Stephen’s is at the rear of the sanctuary. Although the ICONYX IC8-RN arrays reach that area, Gary filled in the loft with a couple of Renkus-Heinx CX61 compact two-way Complex Conic loudspeaker systems. The CX61’s 6.5-inch woofer and 1-inch titanium high-frequency driver can deliver up to 120 dB SPL peak, far more than is needed to fill the loft, so they are just turned up enough to ensure the choir enjoys clear, rich sound.

A QSC Q-SYS Core processor manages signal routing and processing and provides mixing, while Crown amplifiers drive the Renkus-Heinz loudspeakers. Steeple Sound provided a touch screen in the back of the sanctuary for primary system control and a second touch screen in the front to enable quick adjustments on occasions when nobody is running sound in the back. Shure microphones serve the pulpit, while an Audix MicroBoom system captures the choir. Audio-Technica wireless microphones complete the mic collection.

That completed the sanctuary loudspeaker system but Gary wasn’t done yet. “We gave them a small additional CX61 and a speaker jack outside because they occasionally do outdoor functions,” he revealed. “They can put the CX61 on a speaker stand and run services out there using the wireless microphones.”

The new Renkus-Heinz loudspeaker system is a huge improvement for St. Stephen’s Lutheran Church. “All of the speakers are much closer to the people’s ears than with the earlier systems,” Gary emphasised, “not to mention that the ICONYX digitally steerable line array is laser-focused on them. It’s a night and day difference.”