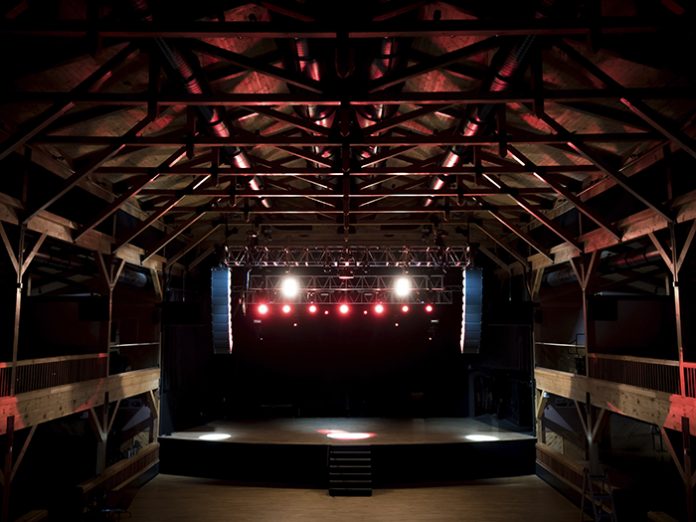 CODA Audio’s flagship system elevates the audience experience by mastering the challenges of a tricky auditorium at Penn’s Peak.

Penn’s Peak plays host to a wide range of national and international artists of all genres and prides itself on providing its patrons with exceptional facilities. By constantly appraising its offer and taking account of every way in which customer experience can be enhanced, the venue retains its great popularity. Most recently the production team at Penn’s Peak took the decision to install a new sound system in its auditorium. The team chose a system based around CODA Audio AiRAY, supplied by Pennsylvania based Saturn Systems.

Penn’s Peak is characterised by its predominantly wooden interior, the acoustics of which alter drastically when the hall is empty at soundchecks and full at showtime. The areas under the balconies on either side of the hall had also presented problems. The team was aware that the experience of patrons in these areas was nowhere near to delivering a satisfying audio experience and needed improvement.

Audio Lead Chris Chalfin explained: “As well as overcoming the inherent challenges presented by the acoustics, we also needed to take into account the very wide range of artists and genres that come through the venue. We needed a system that was clean, clear and in your face – something that had incredible vocal intelligibility. My experience as a touring engineer of using CODA Audio on the road led me to the conclusion that it would be the perfect fit for Penn’s Peak. I’ve been convinced for a while that CODA will be the next major player in the audio industry – so much so in fact, that I was the first owner of a CODA system in the USA! When the team at Penn’s Peak had agreed that we needed to upgrade, I knew it was the perfect opportunity to put the venue ahead of the audio curve.”

CODA Audio USA arranged a series of on-site demonstrations which confirmed to all in attendance that Chris’s confidence in the system was well placed. It’s technical director, Michael Creason, then worked closely with Chris and his crew to help design and optimise the system on-site, addressing their key concerns around improving clarity and headroom, low-frequency definition and coverage.

The compact, lightweight (40kg) elements of the AiRAY system deliver an abundance of headroom for any application regardless of scale, effectively granting Penn’s Peak stadium levels of output with which to work. Where usually a system delivering this kind of power would be simply too big and expensive for the space, AiRAY makes it possible.

To control the low-frequency reverberation and keep the stage area ‘clean’, Michael and the team decided on a splayed end-fire subwoofer configuration, that dramatically reduced interaction with the venue surfaces while reducing the deep nulls normally caused by spaced left/right sub-arrays.

Since all CODA elements share the same sonic signature and fidelity, the team was able to overcome the issue of uneven coverage by employing HOPS8 in the areas under the balconies, ensuring that audience members in these areas shared the exact same experience of those in unobstructed seats.

Once the system was installed, the first run of shows emphatically dispelled any doubts anyone might have had about just how effectively it met the Penn’s Peak challenge. Chris continued: “I was confident from the outset. The previous system was not only underpowered but it felt disembodied. The CODA systems bring the show right in front of you – as if you have a pair of studio monitors sitting three feet away. The overall system works as a cohesive unit and provides extremely even coverage through the entire venue, something that had simply never been achieved before.”

The system at Penn’s Peak comprises 10 AiRAY per side, 8 SCP-F subs configured in end-fire arrays under the stage, supplemented by 6 HOPS8 across the front of the stage for lip fill, 8 HOPS8 for under-balcony fills and two HOPS8 for VIP suite fills. A monitor system comprising 10 CUE TWO wedges, two APS over two APS SUBs as sidefills and an additional two APS SUBs as drum fills, completes the picture. Everything is powered by a combination of CODA Audio LINUS14 and LINUS10C amplifiers.

Chris Chalfin concluded: “We’ve had nothing but stellar reviews from visiting engineers, as well as from audience members who are familiar with the venue. Many patrons go out of their way to comment on how radically the quality of the sound has improved since the system was installed. Most of the visiting crews and engineers have never heard of CODA before and by the end of the night they are just blown away by the system. The most common reaction we’ve heard from visiting engineers has been – ‘I’d put this system up there with the best I’ve ever mixed on…’ From my point of view, it’s gratifying to see engineers having that same ‘wow!’ experience that I enjoyed when I first heard a CODA Audio system.”

Penn’s Peak Production Manager, Dustin Rehrig added: “The recent install of the CODA AiRAY system in our venue has been a wonderful addition. The sound quality is like no other. Our venue is not the easiest room to cover but CODA stands tall with flying colours! The clarity, warmth and thickness of the system is superb and loved by all the visiting engineers. Clearly the best investment we’ve made for our company.”

The high praise of visiting engineers dovetails with the reaction of music fans at this very special venue to make an irresistible case for the way in which CODA’s next-generation technologies can deliver solutions of a higher standard for the very toughest acoustic challenges.