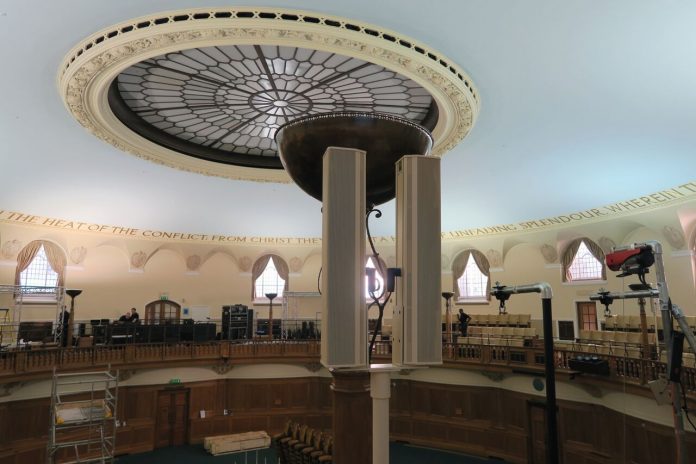 The need to address historic intelligibility problems and improve the overall audio quality were the key factors behind a recent installation at Church House Westminster in Central London. The project focused on the site’s two-level Assembly Hall, a beautiful Grade II listed space that is primarily used for conferences and other meetings.

The reputation and range of d&b audiotechnik meant that the brand was Church House AV manager Ian Locke’s first choice for the upgrade, but he engaged the services of freelance sound designer and engineer Phil Wright to ensure the most appropriate units were selected throughout the cylindrical, dome-roofed venue.

“We undertook some tests with the existing system in the downstairs area, and found that for any given impulse we put into the PA we could measure ten to fifteen distinct arrivals at the measurement microphone. From an intelligibility point of view it really was a bit of a disaster, so resolving that was priority number one for the new d&b system design,” explains Wright.

The answer came in the form of d&b’s Y-Series, designed to suit applications as varied as houses of worship, symposiums and car expos. The installation oriented Yi7P loudspeaker cabinets house two 8” low frequency drivers and a 1.4” compression driver. At Church House, Yi7Ps are flown either side of the main stage and a pair of Yi-SUBs provide low end reinforcement.

The Y-Series products are augmented by a total of seven E6 loudspeakers. These compact multipurpose loudspeakers, with integrated coaxial drivers, have been specified to handle both frontfill and nearfill duties in the downstairs space.

Church House’s upstairs area constituted another distinct challenge for Wright and Locke, who were understandably keen to avoid any negative impact from the balcony fill and delay system on the downstairs area. A number of different d&b products were considered before they opted for the 16C column loudspeaker. The 2-way passive 16C is the smallest column in the xC-Series, housing four 4” neodymium drivers and a 0.75” compression driver mounted on a CD horn.

“At the very time that we were looking into equipment for this area of the assembly hall, d&b was bringing out the 16C, and not only did it immediately hit me as being highly suitable on an aesthetic level, it also allowed us to achieve control down to about 400 Hz. This meant that we could really minimize the amount of information reaching the downstairs area,” observes Wright.

Powering the system is a combination of 10D and 30D amplifiers. Among the newest additions to the d&b audiotechnik amplifier range, these units were developed to suit a wide range of permanent integration applications. Ideal for environments needing lower SPLs, the 2RU, 4-channel 10D features a Class D topology and extended input management functionalities, with separate Input Gain control for each input channel, General Purpose Inputs/Outputs (GPIO) and a General Fault connector. The 30D shares many of the same attributes, but is geared towards applications with medium to high SPL requirements.

After a competitive tender process, London based sound engineering, audio hire, sales and installation company RG Jones was appointed to undertake the fit-out of the new system. Jeff Woodford, project engineer at RG Jones, oversaw the installation, which he says proceeded “very smoothly indeed. We had about four people onsite doing cabling work and fitting loudspeakers at any one time. The overall improvement in sound quality is clear for everyone to hear – I would say it is about ten times better than before!”

The opinion is shared by Wright, who reports that the post installation feedback from the first events carried out with the new system has been “extremely positive. Everything has now been installed and aligned as per my design and the guidance of Oran Burns, from d&b GB’s Education and Application Support team. The improvement has been dramatic.”

Wright is also full of praise for the “highly sophisticated” nature of the d&b boxes, in particular their pattern control. “They have become really good at controlling the mid/low frequencies. It’s definitely a brand I will be looking at more keenly for future projects.”

Final word on the new setup goes to Locke, who says the new system has made “a vast difference. The installation has increased versatility and improved the clarity, allowing us to deliver events more successfully. It has also allowed us to deliver a wider range of events as a result of improved response. Investing in sound system design and a great manufacturer has really benefited our engineers and clients. The team from d&b has been a pleasure to work with, and through RG Jones has delivered a great result.”