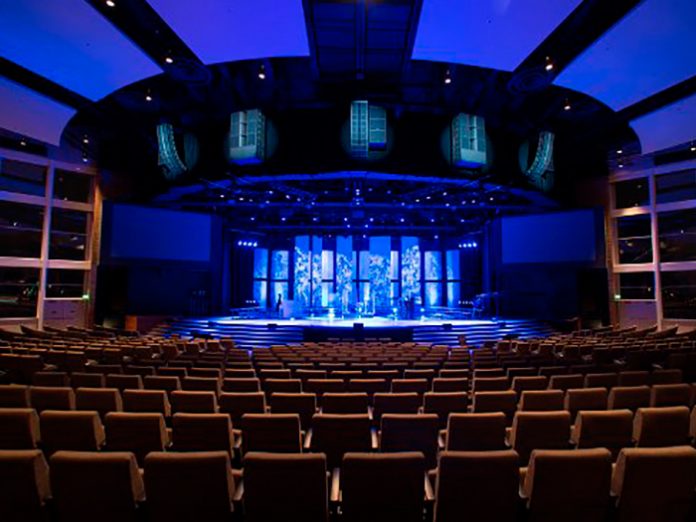 Cherry Hills Community Church in Highlands Ranch, Colorado found itself in need of an audio system that could adequately keep up with its spectacular growth. After turning to the team at Franklin, Tennessee-based Mankin Media Systems to design and supply a new system, the Christian church is now enjoying a new house loudspeaker system based on L-Acoustics Kara elements.

“It was one of the more complex projects we’ve ever been involved with,” said Mankin’s Tim Corder “The entire leadership of the church had changed since the last system was installed about eight years ago and the new team really wanted a system worthy of their reputation as a growing, dynamic congregation.”

That was no easy feat. Tim described the room and the previous install as “the most polarizing audio experience I’ve ever had,” he said. “Cherry Hills had reached the point where the leadership felt that their worship experience was being compromised by the quality of the audio, which is a tough place to be for a church that is so outreach-focused, and the stakes were high. You know how people will talk about the hardest room they have ever worked in? Well, it’s no exaggeration to say that everyone who came in said some variation of that. The audio quality didn’t just change in different parts of the room; it would change drastically from seat to seat. You could stand in front of one seat and it sounded like there was a blanket over the speakers, then move over just one seat and it was icepick piercing.”

In addition to providing consistent sound quality and volume in all parts of the room, the new system would have to be rider-friendly and concert-ready. “As Cherry Hills has grown, they are doing an increasing number of concerts by popular Christian artists and the goal was to have a system installed that would allow these artists and their crews to leave whatever speakers they were touring with on the truck and confidently use the house system for all shows,” Tim added.

They found the answer to both of those needs in the form of an extensive install of L-Acoustics Kara – 30 enclosures total – supplemented by nine SB18i and eight KS28 subs, a trio of ARCS Wide enclosures, plus 18 X8 and 13 X12 coaxial elements used for fills and stage wedges.

“Cherry Hills officially goes on record as the first house of worship to install our new KS28 subs,” noted L-Acoustics’ Regional Sales Manager BJ Shaver. “However, the church initially ran into a budget issue because the stage build-out for the sub bunkers was going to cost too much. So they opted to fly the KS28s and have been amazed with their performance. A common misconception with churches is that you have to have subs on the ground to get ‘impact,’ which simply isn’t true.”

A pair of L-Acoustics LA12X amplified controllers power and process the cardioid-configured KS28 sub hangs, while 18 LA4X – chosen for their four-channel design, resolution in the main arrays, and AVB-ready operation—drive the rest of the system.

The 3,300-seat auditorium, which was built in several phases, presented some big challenges, specifically uncovering the balcony areas. When seated in the balcony, there is not a direct line of sight to the main arrays or main projection screen. “It really was like a whole separate space with its own projection screen and its own sound system,” said Tim.

They ended up with two rows of fill speakers for the balcony in order to give the presence that they were looking for across the entire space, and Tim reports that the placement of the individual cabinets was “super critical.”

Complicating things further was the fact that there are glass walls on each side of the main room and keeping audio controlled and off of those surfaces was crucial to both sound quality and intelligibility. As with all design aspects of this project, L-Acoustics’ Soundvision 3D real-time system modelling software proved to be every bit as invaluable as the speakers themselves in determining the ideal enclosure quantities and placement.

“Because the church places a very high value on the role of a choir in the services, in addition to the audio experience in front of the PA, we needed extensive pattern control behind the main PA but also a system so the choir could hear,” said Tim. This was accomplished with the three ARCS Wide enclosures. “They just line up so seamlessly and create this little slice of sound. If you can see either side of the box, then you’re out of the coverage.”

The three ARCS Wide are configured so that any combination of the three can be active based on the location of the choir. “It was more than just pattern control. The ARCS, in terms of tone and audio quality sound just like the Kara boxes covering the rest of the room, so even if there is any spill, it sounds consistent. That kind of consistency is one of the things we really value about L-Acoustics products and a big reason we use them so much.”

Tim’s confidence was echoed by Chris, who does outside gigs in arenas when he’s not at Cherry Hills. “The old system was spotty in term of coverage, lacked low end, and was very harsh in the high end, and now we have a very pleasant sounding system that has actually allowed us to push the SPL during a typical service without complaints. And in terms of being rider-friendly it was a ‘no-brainer.’ There is not a touring act out there that is going to question an L-Acoustics rig.”