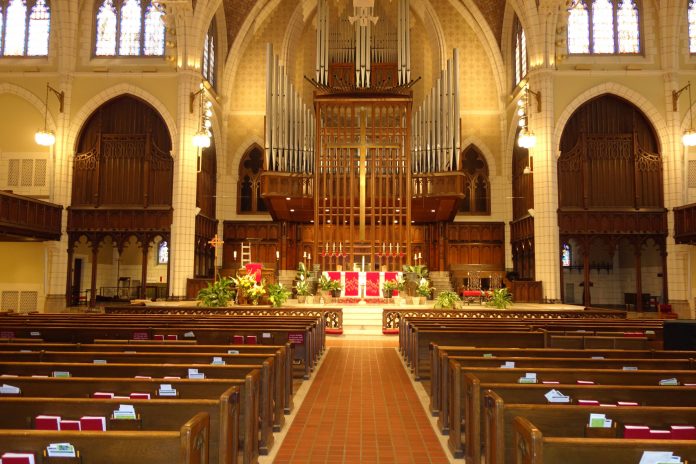 Central Lutheran Church has been a Minneapolis landmark since the large stone building was finished in 1928. This church community has a storied history of implementing cutting edge communications technology to enhance its service, for instance in 1922 when the church pioneered religious services on the radio, broadcasting its first service that year. This tradition of embracing cutting-edge audio technology continues into the modern era with the church’s recent installation of a PA system consisting of a number of Panaray MA12EX modular line array loudspeakers from Bose Professional.

The MA12EX modular loudspeakers solve a major issue for Central Lutheran. The system replaces a highly complicated older PA system that relied on large horns but whose insufficient coverage also required the placement of a number of fill speakers throughout the sanctuary, including under some pews, to supplement an inefficient central cluster directly in front of the church’s organ. In fact, some church members, including the church’s senior pastor, felt that those same horns obscured what many consider one of the most beautiful pipe organs in the country.

The Panaray MA12EX modular line array loudspeakers are set up in 10 triple-stacked arrays and 10 double-stacked arrays closely aligned with architectural columns inside the sanctuary. These modules – just under eight feet tall and barely four inches wide – unobtrusively project the sound everywhere it needs to be in the 2,000-plus-seat church, while also keeping it away from reflective surfaces, thereby greatly enhancing speech intelligibility. The MA12EX arrays were the perfect solution to address the church’s unique architectural challenge, in which a broad but shallow balcony covers much of the main-floor seating. The loudspeakers – 50 in total – can be aimed precisely, allowing the speakers to be heard clearly in virtually every seat without significantly increasing the volume. These main speakers are supplemented by nine Bose® FreeSpace® DS 100SE ceiling speakers, with four allocated over the choir area as monitors and five others covering the church’s lobby area. The entire system is powered by four Bose PowerMatch® PM8500N networked amplifiers, and speaker management is handled via a Bose ControlSpace® ESP-00 processor.

“The architecture was quite a challenge,” says Jeff Geisler, Director of Outside Sales at EMI Audio, the AV systems integrator tasked with the project. “But the Panaray MA12EX line arrays were the perfect choice for it. We were able to cut down tremendously on the complexity of the previous sound system while making the church’s sound even clearer and more powerful. And the ESP-00 processor lets us zone the system very precisely; for instance, we have a preset in the system that lets them activate only speakers needed right around the baptismal font near the rear of the church, or the small wedding chapel off to the side of the main altar. That allows for a very efficient use of the system, putting sound exactly where it needs to be exactly when it needs to be there, and nowhere else. It’s a great system for integrators to work with.”

The church’s existing sound system, which was nearly 15 years old, was facing some imminent challenges of its own. According to Mark Kieffer, Coordinator for Sound, Lighting and Video for Central Lutheran Church, these included ongoing component failures. In addition, a planned demolition of an adjacent structure would necessitate the relocation of the system’s racks, and the ongoing rearrangement of some of the sanctuary’s seating into different worship configurations meant that the sound coverage would need to be completely rethought.

“We asked Jeff for a solution,” says Kieffer. “That solution was Bose, and it has turned out great. We had a lot of things driving a change in the sound system, from aesthetics to sound quality, and the Bose system met all of those challenges.” He says that input from attendees indicates that they find the system easier to listen to, with a decrease of between 3 dB to 5 dB but without loss of coverage or clarity. In fact, the Panaray MA12EX solution has actually increased speech intelligibility while also making people feel as though the pastor was talking directly to them instead of above and over them. “The sense of presence is dramatically improved, and the sound is spectacular,” says Kieffer. “Bose gave us everything we needed in a sound system.”