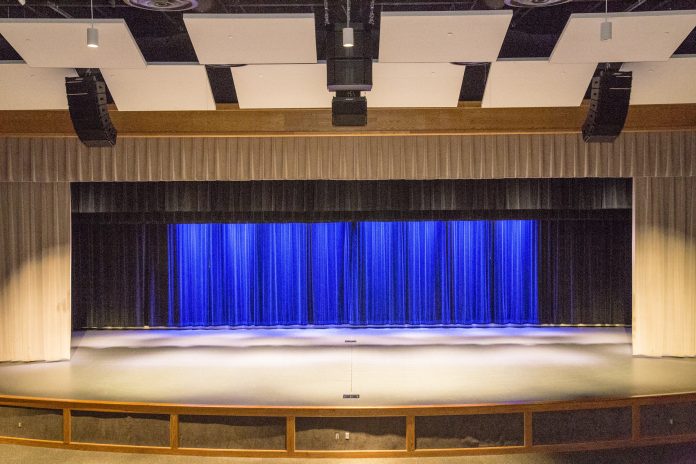 Missouri-based full service systems integrator TSI Global designed, sourced and installed the Bose ShowMatch system as part of an audio upgrade package at the Centene Centre. “They were in the market for a technology refresh, so it was the perfect opportunity to capitalise on the new offering from Bose,” says Paul Murdick, CTS, General Manager at TSI Global.

The new P.A. system at the Centene Centre includes left and right arrays, each made up of six ShowMatch DeltaQ modules, flown in front of the curved stage proscenium. Two additional modules are flown in a centre-hung array below a pair of Bose RoomMatch RMS218 VLF-subwoofers. Eight networked PowerMatch PM8500N amplifiers power the entire speaker system. Digital signal processing and control is provided by a Bose ControlSpace ESP engineered sound processor.

The auditorium features a 60ft wide stage and has 525 permanent seats with space for approximately 200 additional movable seats. The TSI Global team collaborated with Bose Professional on the ShowMatch system configuration, says Paul, who has had a relationship with the theatre for the past 12 years. Using Bose Modeler sound system software, the team determined that the ShowMatch cabinets in the left and right arrays should be fitted with SM20WG12 waveguides to focus the energy onto the front seating section. “Modeler showed our client the value of Bose support and the ShowMatch system impressed me with its high SPL, lighter weight and smaller footprint than other systems. In addition, all these features are available at a very good value, making it attractive for the Centene Centre,” says Paul.

Chris Conway, CPRP, Director of Parks and Recreation for the City of Farmington, stated, “The ease and reliability of operating the system have been fantastic. We got to showcase the ShowMatch system at a recent event, and the sound was awesome. Soundcheck and rehearsal were seamless and completed in minutes because of this system. I have nothing but praise for it, it has been great.”

TSI Global outfitted a stage manager’s position with a Bose ControlSpace CC-64 programmable networked controller that offers simple operation of the system for local groups using the venue for events such as dance recitals and play rehearsals. An iPad app provides more experienced operators with deeper access to the Bose system. “The community has embraced the venue and is taking advantage of being able to use it for all kinds of entertainment, so the versatility of the ShowMatch system is critical,” says Paul.

“The Centene Centre staff has been overwhelmingly pleased with the performance and the quality of the new ShowMatch DeltaQ array,” Paul reports. “The system differentiates the venue and will undoubtedly bring more opportunities to the theatre.”