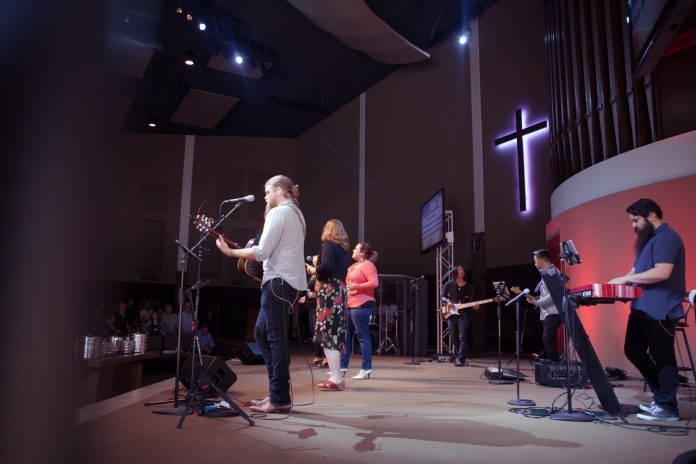 A part of the Reformed Church in America, the New Life Community Church has been a member of the Artesia/Cerritos community in southeast Los Angeles County for more than 80 years. Most of the buildings on its current nine-acre campus were built in 1972, including a 620-seat Worship Centre that hosts services, concerts, and other functions. With a stage ramp, single-level entry, a green room, and areas for props and wardrobe, the Worship Centre is well equipped.

Recently, the Worship Centre received a major remodel and technical upgrade, enabling the congregation to enjoy a more contemporary sound and look. The previously raked floor was filled in to achieve a flat-floor design, and new infrastructure was installed, including floor boxes, power locations, CAT5 cabling, mic and monitor lines and more. To top it off, systems integrators TechArts of nearby Cypress, California, designed and installed a new Dante-enabled sound system based on a Symetrix Prism 12×12 DSP.

“The original install had two older Symetrix Express 8×8 DSPs, which used CobraNet,” begins TechArts programmer and associate designer Jason Vandergrift. “The current Symetrix DSPs are so much more powerful that we were able to replace both older units with one Symetrix Prism.”

One major goal of the upgrade was to improve the communications system. “There was an existing party-line-type, analog communications system that was part of the original install,” Jason recalls. “It was noisy, and nobody was happy with the way it sounded. Also, with that type of system, everybody talks to everybody on Channel A or Channel B. Using the Symetrix Prism, we were able to connect a bunch of Studio Technologies 2×2 Dante audio communication devices to the network and program individual, discrete routings between them. We built everything into a mixing matrix in the Prism, and I programmed preset routings for the church’s various needs.”

The biggest issue was communications between front-of-house and the musicians onstage, but it was also important to provide flexible communications between the music director, FOH, and other volunteers. With the old system, there was no way for the music director to communicate to the sound engineer and lyrics person if, say, the band was going to skip a verse or a song, resulting in the wrong lyrics appearing onscreen.

“We also needed a system that worked with the musicians’ in-ear monitors and integrated with the talkback system they were already using,” Jason notes. “With a Dante-enabled console and comm system, I could route the talkbacks into the comm system, managed with the Prism. Now the person at FOH and whoever is running lyrics or the video machine can talk directly to the music director and the production crew. We can route the FOH engineer’s comm mic to all in-ear monitors onstage. Unlike a regular talkback system, we have programmable, two-way communication. And the FOH engineer doesn’t have to dig through layers on a digital console to set up a PFL talkback.”

Routing everything through the Symetrix Prism also makes the talkback system less vulnerable. “In churches, volunteers break stuff and don’t even realise it,” remarks Jason. “Let’s say your talkback system is running from the FOH console, on a utility layer deep in the desk that nobody touches, and a volunteer recalls a mixer scene that doesn’t include the talkback routing. The engineer who is visiting that week has no idea that they’ve killed the talkback, and nobody can fix it. When you run it all through a Symetrix DSP, which nobody touches, you can set up a Symetrix ARC-WEB control system with a couple of presets for the comm system-I. Thus, creating Symetrix presets for all of the audio stuff-allows for the system to operate reliably.”

In addition to communications, the Prism handles the Worship Centre’s PA speakers and more. “With Dante, I wasn’t limited to the Prism’s analog I/O,” Jason observes. “Once audio was in the network, I set up all sorts of static routes in and out of the Prism for various purposes. For instance, I needed an ADC circuit for a broadcast mix because when the pastor was speaking the volume was too low, and the video volunteer didn’t understand how to set the volume. So I programmed a solution in the Prism.”

A devoted, long-time Symetrix DSP user, Jason has a deep understanding of the products’ capabilities. “We use Symetrix on every project that requires a DSP,” he confirms. “They sound great, they’re inexpensive, and I can program them to do whatever we need. In addition, they have a crazy amount of horsepower. With just one Prism, you can manage 64 channels of audio. Furthermore, the Dante-enabled Prism DSP was key to our ability to integrate the talkback and other audio systems at New Life Community Church.”