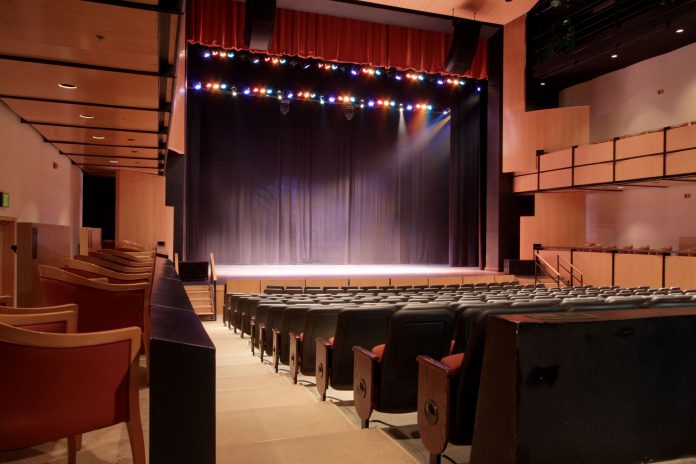 Located in between Albuquerque and El Paso, the Spencer Theatre for the Performing Arts in Alto, New Mexico, is a gem of the Southwest. Opened in October of 1997, it established a year-round program for world-class performances in theatre, music and dance. The $22 million structure is splendid and elegant yet, inviting and welcoming with intimate seating for just 514 guests. Its architectural and acoustical design with most seating on the floor and with galleries along the sides evoked the best of the famed European concert halls however, making that design work for a wide range of music types and genres had been a challenge for much of the Spencer’s two decades. The problem was solved with an upgrade to a RoomMatch loudspeaker system from Bose Professional.

Moyers Group was the AV systems integrator brought on to design and install the new sound system in coordination with Bose engineers. The system, a stereo configuration, consists of four RoomMatch enclosures hanging per side powered by three Bose PowerMatch PM8500N networked amplifiers. The Bose RMSHAD gain shading kit was also used to smooth out the throw to the upper levels of the balcony assuring even, consistent coverage throughout the seating areas. “We demoed a number of other systems and we also tried applying some beam-steering technologies but these didn’t offer the full range sound that the RoomMatch did while it covered all the seating areas,” explains Caleb Howe, Design and Sales Associate with Moyers Group. “The RoomMatch loudspeakers are the solution they’ve been looking for here.”

Adding to the ongoing acoustical issues the hall’s original sound system was no longer able to meet the expectations of a wide range of performances in the modern era. “We’re talking about bluegrass to Broadway and everything in between,” observes Bob Phaup, the Spencer Theatre’s Technical Director. “From classical concerts and Broadway shows to Led Zeppelin and New Age-style bands, the need for full-range versatility with all the essential coverage and frequency response was a tough match for some brands on the market today but Bose was able to offer a real solution.”

Bob says a number of leading brands did computer modelling of the venue, offering their product-based solutions but he also realised that this venue needed more than that. “In my opinion, many computer models don’t look at the sound from the audience’s point of view,” he says. “I’m pretty old school, I want to know how the sound is going to be in every part of the room and so did the Moyers and Bose engineers where everyone else sent print-outs of models, they sent their engineers here, three times, to establish a relationship with the physicality of the room to inform their powerful modelling. I think that’s how you should approach system design and Moyers Group along with Bose delivered on that promise. They took the time to visit the hall and accounted for all the venue’s unique physical personalities to decide what setup was best suited to meet the broad spectrum of audio needs. As a result, the Bose RoomMatch system fit the Spencer Theatre like a glove.”

Howe fully agrees, “The Bose engineers really took the time to make sure that the right RoomMatch enclosures were chosen and configured for this room’s exact needs.” Bob Phaup feels that the combination of great technology and engineers who care about sound quality is unbeatable, “That’s what Bose offered  the RoomMatch speaker and a willingness to make sure we had a perfect fit,” he says. “They put the human touch on a great system to make sure that a great performance hall stays that way.”