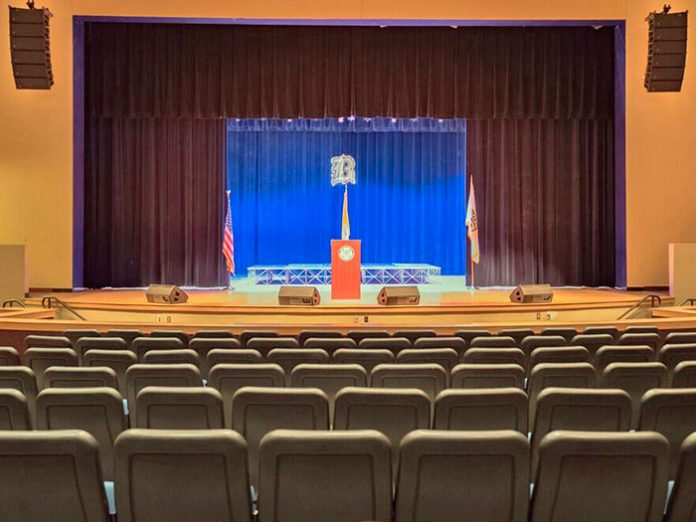 Belen Jesuit Preparatory School sits on a 33-acre site in western Miami-Dade, Florida, enjoying the rich cultural diversity of this major metropolitan community. Central to the school’s fine arts programs is the Ophelia and Juan Roca Theater at The Ignatian Center for The Arts. In an effort to provide the best possible audio quality for the school’s theatrical, musical, and related offerings, Belen Jesuit recently upgraded its sound reinforcement system—deploying loudspeakers drawn from the Event Series catalog of Valencia, Spain-based D.A.S. Audio.

“The Ophelia and Juan Roca Theater at The Ignatian Center for The Arts is a very prestigious performing arts venue,” Vidal reports. “The theater seats 663 people and hosts a wide range of fine arts offerings. The school had been dissatisfied with the room’s existing sound reinforcement system and, recognizing the importance sound plays, was eager to upgrade. After carefully listening to the concerns of school management and evaluating the best possible options for the space, the decision was made to deploy D.A.S. Audio’s Event 208A line array enclosures and Event 218A subwoofers for the main system.”

Ultimately, the TAVS crew flew six D.A.S. Event 208A line array enclosures each for the left and right sides. Low frequency support is handled by two Event 218A subwoofers, which are placed on the floor—on the left and right sides of the stage area. Four D.A.S. Event M210A 3-way active stage monitors provide performers with a monitor feed. These loudspeakers are positioned as required for each particular program.

The installation itself posed some unique challenges due to the venue’s structural design. “The theater was constructed in a such a way that there was no easy access to the roof’s beam structure,” Vidal reports, “and school management was not willing to break the ceiling structure in order to deploy the new PA. Because of this, we couldn’t ‘fly’ the left and right loudspeaker clusters in the traditional manner. As a result, we designed and developed a special wall mounting system that would be both structurally and aesthetically conforming to the theater while maintaining acoustical integrity.”

When queried about those characteristics that made the D.A.S. Audio Event Series loudspeakers the ideal choice for this project, Vidal offered the following thoughts. “We found the coverage pattern and throw structure of the Event 208A to be the perfect fit for this venue,” he said. “The 208 offers excellent speech intelligibility and sound pressure output for indoor theater applications while being quite cost effective. Additionally, the combined weight of the box and rigging hardware was also a very important consideration as a result of the unique integration scenario this project presented.”

For many installation projects, questions inevitably arise. Knowing that quality support services are available is frequently a very important consideration as part of the business transaction. In this regard, Vidal gives D.A.S. Audio’s customer and technical support services a positive report. “The customer support D.A.S. offers is second to none,” he says. “D.A.S. takes care of our customers and, to us, this is priceless!”

Belen Jesuit Preparatory School’s new loudspeaker system was installed in July and was placed into service immediately afterward. Since its deployment, Vidal reports the system has been very well received. “Everything is working as intended with this installation,” he says. “Our client has been very complimentary of both the system’s performance and the way it blends aesthetically into the room. The sound coverage is even throughout the house and audio quality is clear and very musical. This project has been a win-win for everyone involved.”